On page 334 for the state of $U_f$ (which flips the sign of the desired state) at different steps.

I was wondering what is the reason for this inconsistency in the textbook and the IBM quantum composer.

The state you obtain is the following one: $$\frac12\left(|00\rangle+|01\rangle+i|10\rangle+i|11\rangle\right)$$ instead of: $$\frac12\left(|00\rangle+i|01\rangle+|10\rangle+i|11\rangle\right)$$ You can see that the difference between these two states is the fact the the $\frac\pi2$ phase (that is, the $i$ factor) is placed on the states that have their first qubit set to $1$ instead of their second one. This is due to the fact that Qiskit uses little-endian ordering for the qubits, contrarily to most textbooks (in particular, contrarily to Robert Sutor's one).

What this means is that you must read the qubits from bottom to top to read the state. Thus, when you want to apply the $S$ gate to the second qubit, you have to do it on the first wire of the composer, which will give you the right result.

All in all, it is supposed to look like this on the IBM Quantum composer:

which will give you the expected state: 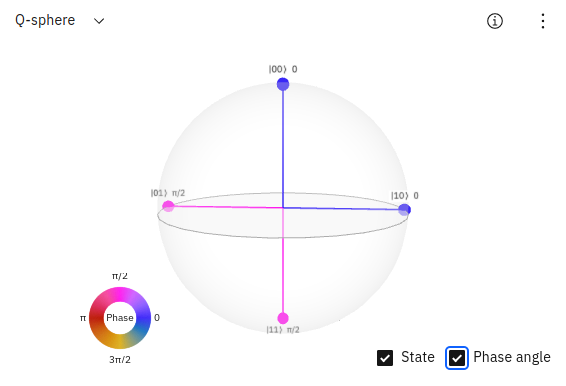 6
How to implement a Square root of Swap gate that swaps 2n-qubits on the IBM Q (composer)?
3
Implementing Deutsch's problem on IBM Q composer
6
Why is a different convention used for the $Rz$ implementation on IBM Q?
1
Hadamard gate for three qubits; inconsistency between IBM and Matlab
6
Simple Hadamard Circuit gives incorrect results?
1
Why is a 15-qubit IBM quantum computer not working correctly?
1
How to apply gates based on a random decision on the IBM quantum computer?
0
Hadamard cascade
1
Bell state measurement IBM circuit composer