In Nielsen and Chuang, there's the following paragraph:

I'm confused about why FANIN isn't required to be able to simulate all other elements in a classical circuit, while FANOUT is required?

A NAND gate is a universal classical gate. All boolean logic can be implemented using only NAND gates. This is clear because SOP/POS implementation needs only AND/OR/NOT and NAND can make all three of those gates as shown bellow. 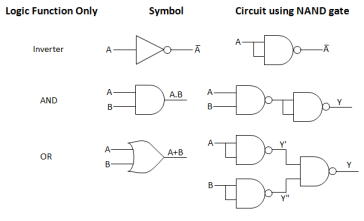 Quantum Computing however has the constraint/feature of requiring all operations to be reversible, and the NAND gate itself (like AND and OR) is not reversible. For instance if I tell you NAND$(X,Y)$ $=1$ you have no way of reversing that operation to tell me what $X$ or $Y$ is.

Which means we have successfully done a NAND operation on two qubits $a$ and $b$. However this gate doesn't only output the bit $c$ it also outputs $a$ and $b$ which are fanout bits.

Therefore we can say that the Toffoli can act as a NAND gate that also fans out the two input bits. But the fanout doesn't even matter for universality since we showed up above just having the NAND operation gets the job done for us. The fanout bits simply exist because of the conditions imposed on quantum operations.

Not the answer you're looking for? Browse other questions tagged quantum-gate quantum-circuit or ask your own question.