According to Wigner’s theorem, every symmetry operation must be represented in quantum mechanics by an unitary or an anti-unitary operator. To see this, we can see that given any two states $|\psi\rangle$ and $|\psi'\rangle$, you would like to preserve

under some transformation $O$. If $O$ is unitary, that works. Yet, we can verify that an anti-unitary $A$ operator such that

I was wondering if one could make an anti-unitary gate? Would that have any influence on what can be achieved with a quantum computer?

As a qubit is a spin-1/2 like system, for a single qubit we need to perform $$T=iYK\tag{3}$$ where $K$ is the complex conjugate. If you have an state $$|\psi\rangle=a|0\rangle+b|1\rangle\tag{4}$$ then $$K|\psi\rangle=a^*|0\rangle+b^*|1\rangle.\tag{5}$$ I do not think you can build the operator $K$ from the usual quantum gates without knowing the state of the qubit beforehand. The gate has to be tailored to the state of the qubit.

I know now of one preprint Arrow of Time and its Reversal on IBM Quantum Computer (2018) where the authors claim to have achieved this on a IBM backend. But I do not know if their time reversal algorithm is the same as making an anti-unitary gate.

No, you can't perform anti-unitary gates. Or rather: if they are possible, then faster than light communication is possible.

For example, here is a circuit that remotely detects whether or not a conjugation gate was performed: 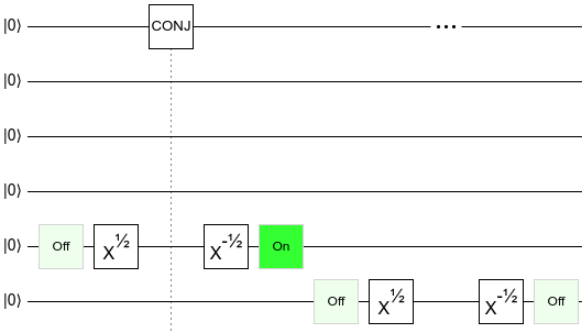 This works because conjugating sqrt(X) is equivalent to inverting it. The conjugation between the X^(1/2) and the X^(-1/2) makes them add up to an X instead of cancelling to an I. So they act as conjugation detectors.

(It might be a bit silly to associate a conjugation with a specific qubit, as it is a global effect. Perhaps it is coming along for the ride as part of another operation, such as the "Universal Not".)

Of course, this diagram assumes a particular notion of simultaneity (indicated by the dashed vertical line). But that means antiunitary operations would reveal a preferred rest frame to the universe! In fact it's even worse than that. Antiunitary operations also break rotational symmetry! The X rotations act as conjugation detectors, as do Z rotations, but Y rotations don't, so you could find the preferred Y axis of the universe. (Well... okay, technically the exact thing you expect to break, and exactly how you expect it to break, will depend on what your favorite interpretation of quantum mechanics is.)

Not the answer you're looking for? Browse other questions tagged quantum-gate unitarity or ask your own question.

3
Why is it important to perform optical quantum computing with ONLY linear components?

14
Given a decomposition for a unitary $U$, how do you decompose the corresponding controlled unitary gate $C(U)$?
19
Why are quantum gates unitary and not special unitary?
2
Calculating entries of unitary transformation
1
Hadamard gate for three qubits; inconsistency between IBM and Matlab
2
What is $\sum_{i}\langle i \vert U \vert j\rangle$ for unitary $U$?
5
Can any "control-something unitary" be written with control and target spaces flipped?
2
How is outer product an operator?
0
Measurement of single qubit operator $U$ which is both Hermitian and unitary with eigenvalues $±1$
12
How can classical bits be copied if qubits cannot be copied?
2
How does quantum gate teleportation differ from state teleportation?