What are the pros and cons of the most popular QC architectures?

I notice numerous companies and research groups around the world trying to build QC's with wildly different approaches. Intuitively, this suggests to me that QC is still very early in its maturation - we are far from certain as to how to actually build one. I see groups using ultracold gases, solid state qubits, etc etc.

Could someone offer a high level overview of the pros and cons of the following approaches:

Why is say, Google or Amazon, so intent on investing in superconducting based QCs while Mikhail Lukin or ColdQuanta spend millions on neutral rydberg atoms while Silicon Quantum Computing in Australia is using Quantum Dots? If I've missed important "paradigms" or architectures, don't hesitate to include them in your answer.

The major quantum computing providers that comes to me right the way are usually:

I think the below two papers will be useful in the discussion about the pros and cons of each of the technologies above.

Additionally, this lecture slides on superconducting qubit might also be helpful. Here is a screenshot of the pros and cons slide: 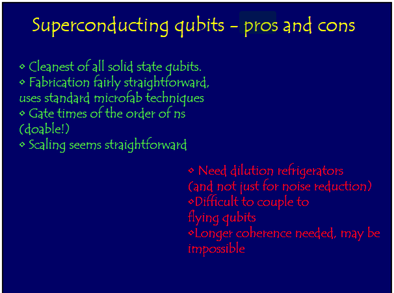 This other paper, Analysis on the Mechanism of Superconducting Quantum Computer, also talks about the pros and cons of superconducting qubits. See the last part of the paper, which I added below for convenient:

3.1.Advantages: The most essential advantage of the superconducting computer is that it fits well with the current microelectronic processing technology. The core circuits of charge qubits, flux qubits and phase qubits that mentioned above are perfectly compatible with the current microelectronic processing technology. Although the current in the wires and the charge on the capacitors in a quantum circuit is in a superposition state compared with the traditional circuit, these wires and capacitors can still be made from current microelectronic processing technology without the need to invent now capacitors and wires. This means it is convenient to extend superconducting system. The good scalability makes the superconducting quantum computer have a high priority, because the fault-tolerant quantum computing which can reduce the error from the decoherence time and the experimental operation need a large scale of qubits. Thus the quantum error correction is the key to make the result of quantum computer credible.

3.2.Disadvantages: The main problem of quantum computer is that it is hard to improve the coherence time of quantum system. As quantum state is very feasible, it is easy to be influenced by the environment. Coherence makes quantum computer superior to traditional computer, although there are some methods such as cavity quantum electrodynamics theory that are introduced into the superconducting system to solve the decoherence time problem. In addition, as mentioned above, the problem decoherence time has not been completely solved. And other important problems of the superconducting system come from Josephson junction. For instance, it is very difficult to reach the absolute zero, so the Josephson junction can not be a non-dissipative component. And it will influence the stability of quantum computer. Therefore, there are many problems need to be solved to realize superconducting quantum computer.

If you interest in Rydberg qubits, knowing about their progress and challenges, this paper will be good: