When I run provider.backends(), ibmqx2 is listed as an available backend, but is not listed on the IBMQ systems page. This file from the archived repository ibmq-device-information associates backend name ibmqx2 with display name IBM Q 5 Yorktown. The IBMQ systems page does list a 5 qubit Yorktown device, but under the name ibmq_5_yorktown. This backend is also available via ibmq/open/main, but is not listed by provider.backends(). Are ibmqx2 and ibmq_5_yorktown respectively versions 1 and 2 of backend software providing access to a single Yorktown device? Or do these names refer to two distinct Yorktown devices?

Actually, ibmqx2 and Yorktown are one quantum processor. When IBM Quantum platform was released, two processors - Yorktown and Tenerife were available. These processor were denoted also ibmqx2 and ibmqx4, respectivelly. Note that Tenerife processor is retired now.

If you have a look into IBM Quantum environment, you can see that there is ibmqx2 processor in list of available devices. See here:

When you click on ibmqx2, this page is shown: 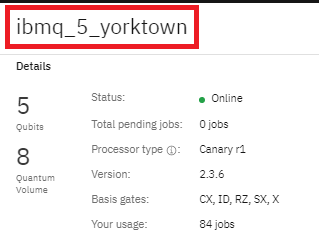 So, it means that ibmqx2 and Yorktown are identical devices. The naming is just a legacy of former times.

I would be happy if anybody from IBM can add more comments.

As @Martin Vesely answered, it is the same device.

Here is the README documentation showing that they are the same: https://github.com/Qiskit/ibmq-device-information/blob/master/backends/yorktown/V1/README.md

Here is a little screen shot of that documentation: 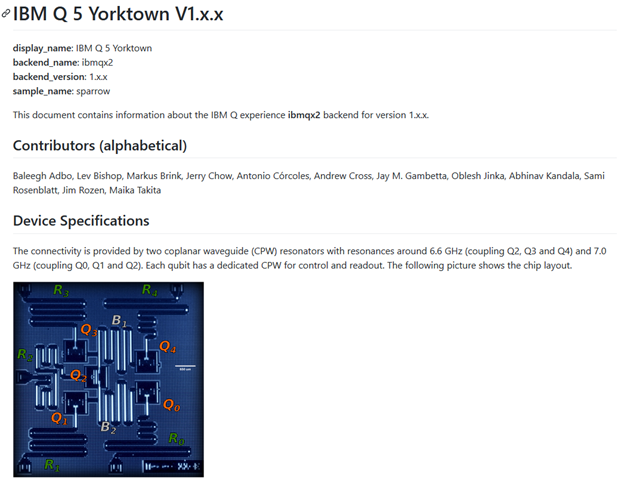 Not the answer you're looking for? Browse other questions tagged programming qiskit ibm-q-experience or ask your own question.

11
Submitting jobs to IBM devices without Python
3
Consistent QISkit error: "All devices are currently unavailable"
5
IBM Q devices scheduling of gates with different durations
3
Why IBM devices have the same number of qubit and the same architecture, but the error rates are different?
2
Why IBM Quantum Experience is giving different results under ibmq_qasm_simulator and ibmq_16_melbourne?
1
Quantum error correction on IBM devices?
2
Why are IBM QE backend results different from the qasm simulator for a simple quantum circuit?
1
Mechanism of measurement in IBM quantum devices
2
What is the minimal delay between gates on IBM devices?