What is the relation between this CGI device and a quantum sorting algorithm?

I just came across this (apparently) entropy-reversing video. It is in fact nothing more than a computer-generated animation: first rendering the physical simulation of a bean machine (often seen in statistical mechanics educational experiments) using color-neutral balls and then assigning color by their destination bin. 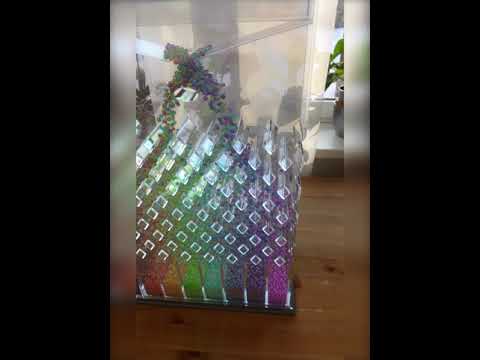 I find this amusing from a computational perspective, and hence my questions:

We could assign integers from $1$ to $k$ for each colour. This then becomes an integer sort of $n$ balls over a range of integers $r$.

I'm no expert on such sorting algorithms, but it seems that they can be done with a worst case time complexity of $O(n+r)$.

For the interacting bean machine to beat this, it would need to be faster to pass $n$ balls through a board of width $r$ (and I'll assume height $r$ too).

If we pass the balls through one-by-one, the falling process would presumably take $O(r)$ time in each case. So for the $n$ balls, that makes $O(nr)$ time, which is much too slow. They also wouldn't get any opportunity to interact, unless the falling was a quantum process with interference effects.

So in answer to your first question, we would need to know how the spontaneous sorting occurs to know how it compares to known algorithms.