I have question about Shor's algorithm, from I know it's for factorize an integer and can factorize big number with ease. I using Qiskit to try make a simple factorization program (with local simulator and I have planning to make it run to real device soon), but I confuse in these part of the code: 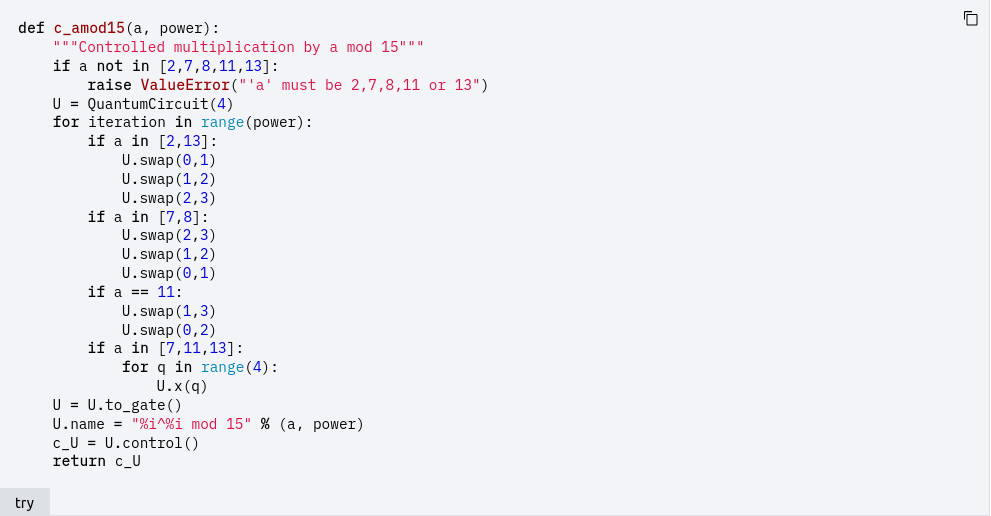 Anyways, now regarding your specific question. The code snippet that you shared is for factorizing the number 15. I first refer to this post to explain your question of the values of $a$. In there, the first three steps for the algorithm are detailed as:

To rule out $14$, take a look at the following graph and explanation from IBM Quantum Composer's documentation for Shor's algorithm.

For why $4$ is left out, I have no answer. My guess is that hard coding the unitary for the operation with $a=4$ was too complicated compared to the other values of $a$ to include in an early chapter of the Qiskit textbook like this one.

Update: the tutorial was updated, and now $4$ is included as it should be.

Now, I'll briefly address this part of your question. The circuit for Shor's algorithm gets bigger in depth and number of qubits in relation to the number you want to factorize. Like in the paper I linked first, their construction grows as $2n+3$, where $n$ is not exactly the number of factorize but it depends on it. Therefore, running Shor's algorithm for a number this big (either simulating it or in a real device), is not feasible yet. It would take a number of qubits not yet available on real devices; or at least in the public ones. And simulating it would not be feasible as the maximum number of qubits you can simulate is 32 (per this answer), which I don't believe are enough to factorize a 10 digit number.

Not the answer you're looking for? Browse other questions tagged programming qiskit shors-algorithm or ask your own question.

4
Maximum number of qubits supported by the Qasm simulator