Why or how is 'cat' state preparation via a C-not-not operation not fault tolerant? 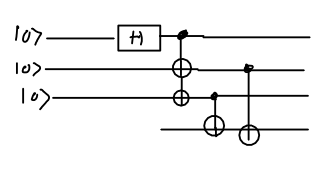 They then explain that this is not fault tolerant because a $Z$ error in the 'extra qubit' (i.e. that at the bottom of the diagram) propagates into two Z-errors in the ancilla qubits (the top three).

They they go onto say that this will not affect the Encoded data (I have not shown this in my diagram).

There are a couple of things that confuse me here. Firstly I cannot see how we get two $Z$-errors on the axillary qubits, Secondly even if we did get two $Z$-errors, surely this is a good thing as it will take our cat state back to the cat state? More the the crux of the issue - I cannot see what criterion they are using for fault tolerance here (I know what it means in the general case - i.e. unrecoverable error with probability no greater then $Cp^2$) and how there example violates it - Please can someone explain this to me.

*Not technical name - I couldn't find what it was actually called.

First of all, the two conditions for fault tolerant measurements are:

The 'ancilla verification' step is then applying two CNOTs on extra qubits (starting in the state $\left|0\right>$) to check the parities $Z_iZ_j$ to see if a bit flip has occurred.

While it isn't necessarily clear that this is the case, it can be shown that $Z$ errors propagate 'backwards' through CNOT gates by starting with the state $\left|++\right> = \frac{1}{2}\left(\left|0\right>+\left|1\right>\right)\left(\left|0\right>+\left|1\right>\right)$ and applying a CNOT to return the same state. However, a $Z$ error on the second qubit returns the state $\left|--\right> = ZZ\left|++\right>$, showing the $Z$ error has propagated backwards.

First a matter of terminology. I don't have my copy of Nielsen & Chuang to hand, but I would have thought that the bottom, extra qubit, is the one that is the ancilla. I am also not entirely convinced that the errors you're talking about can be correct. You seem to be talking about $Z$ errors, but giving results that correspond to $X$ errors. (If a $Z$-gate happens on the ancilla, it makes no difference, up to a global phase, because that qubit is always in a basis state and, as you state, 2 $Z$-errors on your original state give back the original state, so no harm done.)

What the ancilla qubit is doing here is comparing qubits 2 and 3; if they are in the same state (as they should be), you get a 0 answer. If they are in a different state, you get a 1 answer. Thus, if you get a 1 answer, you know something has gone wrong on one of your 3 main qubits, and needs correction. Let's say you've already tested to see that qubits 1 and 2 are the same, and they are. So, having found that qubits 2 and 3 are different, it must be that qubit 3 has the error (assuming the error occurred on one of the main qubits). So, you apply a bit-flip gate to qubit 3.

However, let me show you what could go wrong. Here, $X$ represents a bit-flip error. 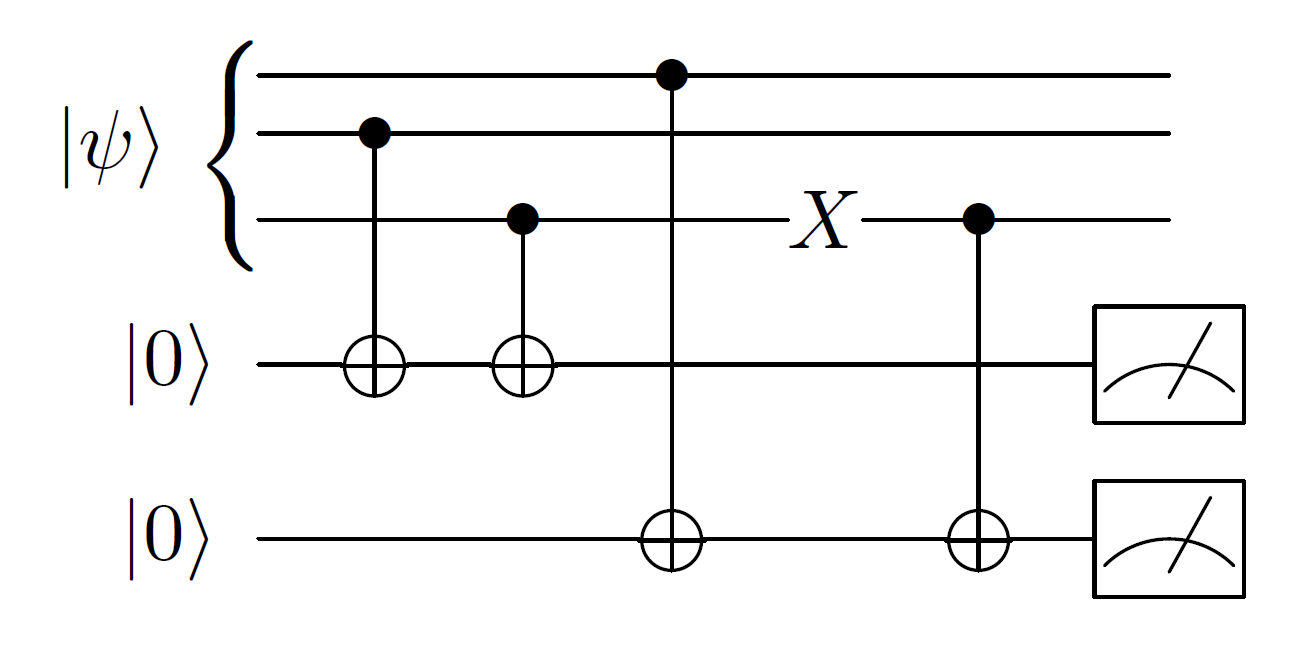 This is the full syndrome circuit, where $|\psi\rangle$ is the cat state you produced before (also called a GHZ state).

What does this have to do with fault-tolerance? Proofs of fault-tolerance are usually based around the idea of tracking the errors in each error correcting code (of which there are many, one for each logical qubit that you want). You can prove that provided each logical gate that you apply (preceded and followed by a round of error correction) only causes single errors on each logical qubit, then there is a threshold error probability below which these errors can be corrected away through the use of concatenated error correcting codes. So, the point is that the structure we've just talked about doesn't obey this. There is a place where a single error actually causes 2 errors on the error correcting code. Thus, the usual argument for fault tolerance does not apply. (Technically, this does not show that there aren't other arguments that could be made, it's just that the standard route doesn't work.)

Not the answer you're looking for? Browse other questions tagged fault-tolerance or ask your own question.

5
Fault tolerant quantum measurement: how is implemented the “majority vote”
2
How is it not a contradiction that it is possible to build fault tolerant circuits with strictly contractive (e.g.: depolarizing noise) channels?
2
Accuracy threshold theorem: what is the physical probability of failure exactly