This question is related to Can the theory of quantum computation assist in the miniaturization of transistors? and Is Quantum Biocomputing ahead of us?

About 10 years ago, several papers discussed the environment-assisted quantum walks in photosynthetic energy transfer (Mohseni, Rebentrost, Lloyd, Aspuru-Guzik, The Journal of Chemical Physics, 2008) and the dephasing-assisted transport: quantum networks and biomolecules (Plenio, Huelga, New Journal of Physics 2008). One major idea there seems to be that the "environment" (quantum decoherence) assists or optimizes the transport of a signal that is also fundamentally quantum coherent in nature.

My question is: beyond the theoretical interpretation of processes happening in natural systems, have physical processes of this kind already been explored in artificial systems, either as quantum computation (perhaps as quantum-enhanced mixed classical-quantum transistors) or in a quantum simulator? Or, if this has not happened yet, could one in principle do it?

Edit after obtaining an answer: Note the lax sense of optimize above. In a biological rather than mathematical context, optimization needs not be absolute but can refer to any significant improvement, like enzimes have been optimized via evolution to increase the speed of reactions.

The idea that photosynthetic systems are doing a Grover search or implementing some quantum algorithm, turned out not to be accepted in the community, and while scientists remained too professional to ridicule the original papers of their fellow-scientists in published papers, the opposition to this idea was observed in many many talks at conferences. Eventually it was even published that the quantum coherence in the FMO has no relevance to its photosynthetic function: see "Why quantum coherence is not important in the FMO complex" by Dattani and Wilkins.

Furthermore, decoherence is not optimizing the transfer. Optimizing it would involve searching the space of all possible bath models, all possible couplings to those bath models, all possible bath spectral densities, and all possible models of static disorder, among other things. This is an uncountably infinite space, and finding some optimum transfer rate is a problem too hard even for a quantum computer to solve. To think that the living organism has found a way to transfer the energy optimally is also flawed. Maybe by removing one water molecule there would be less disturbance and the energy transfer would happen 10$^{-22}$ seconds faster, which means the previous configuration that included that water molecule was not optimal.

The environment/bath does assist the energy transfer, because without it you would have infinitely long Rabi oscillations: 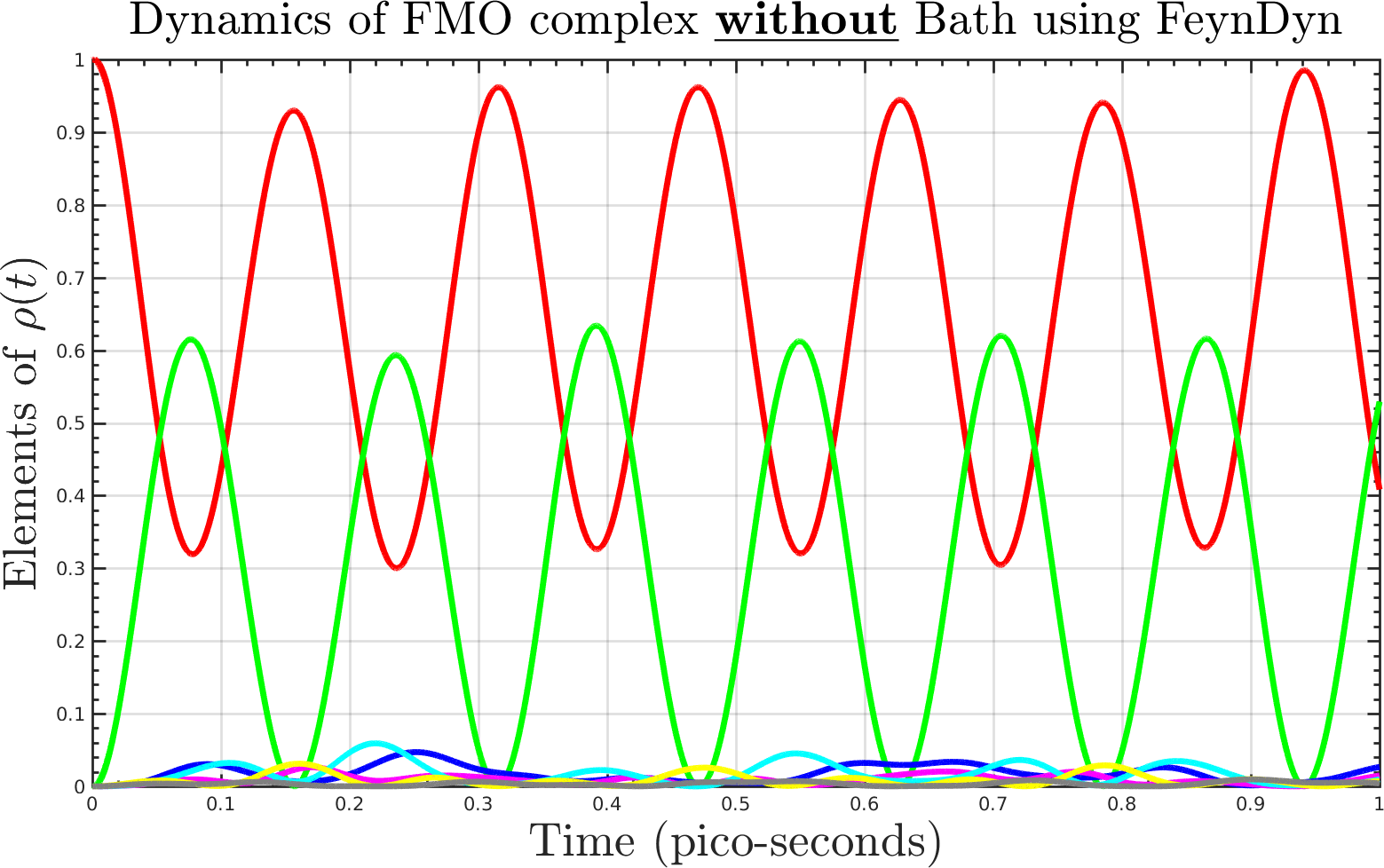 By coupling to the bath, we get damped Rabi oscillations that get localized on the lowest-energy site (known as the "sink") which couples to the reaction center that the excitation needs to get to for photosynthesis: 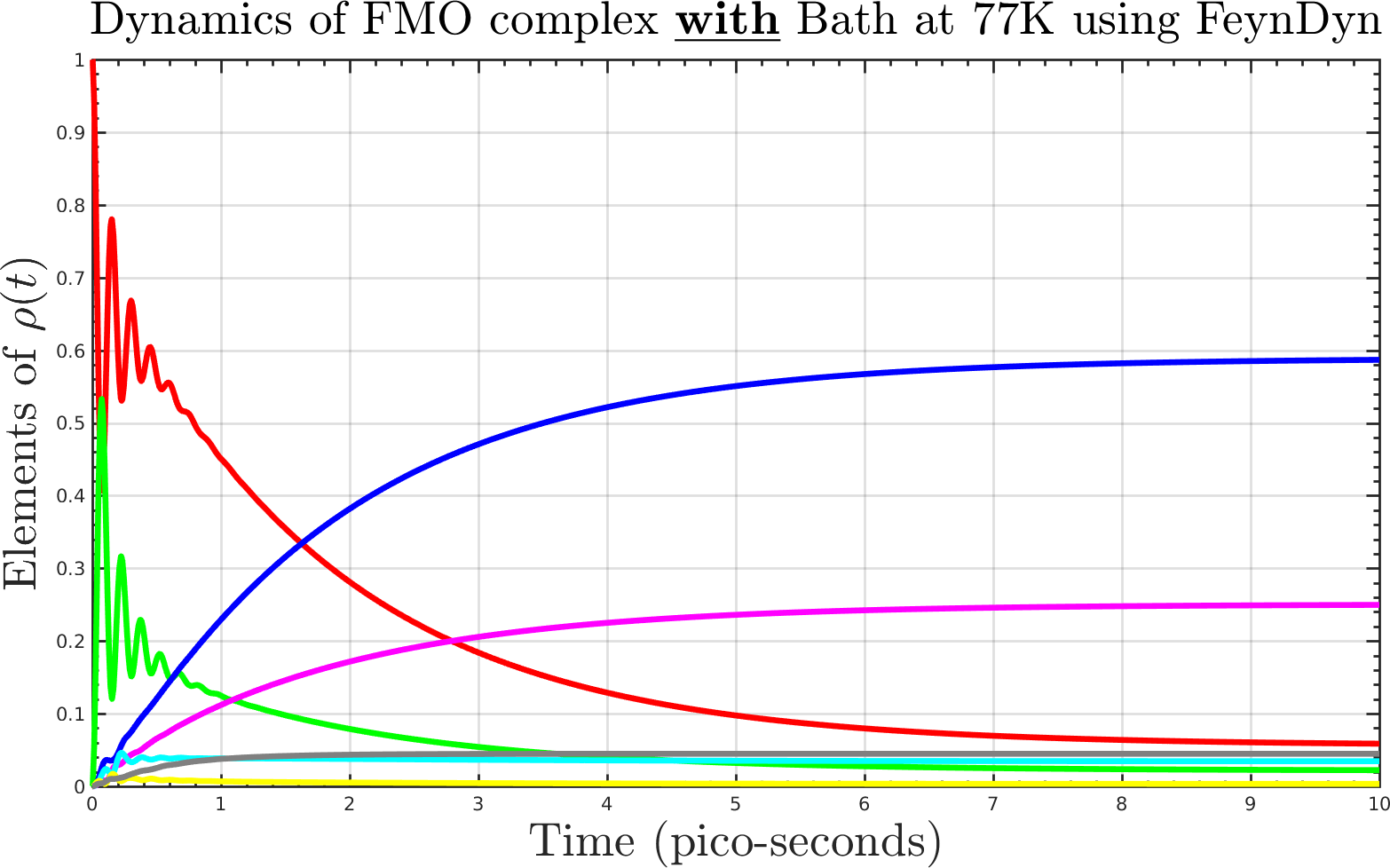 Isn't that beautiful how none of the excitation was getting to the blue site without the bath, but simply by turning on the bath we get a major energy transfer from antenna to reaction center?

You can change the temperature, spectral density, and Hamiltonian parameters and get slower and faster energy transfer rates, and you will quickly see why the crystal structure parameters used in this simulation are not optimal, and why it is going to be impossible even for a quantum computer to find THE optimal transfer rate.

has this been explored in artificial systems either as quantum computation or in a quantum simulator?

I have explained that the photosynthetic complexes are not "doing quantum computation", even though that was claimed in the early papers of Fleming et al.

However it has been found that with quantum annealing, sometimes the ground state solution is found faster when the temperature is increased: http://convexoptimization.com/TOOLS/manufacturedspins.pdf. Having a noisy environment helps to escape local minima where the annealing process would get trapped if you were at 0 Kelvin. So this is an example of an artificial system that uses this phenomenon, and after thinking about your question all of yesterday and today, it is the only example I could come up with.

Environment-Assisted Quantum Transport (ENAQT) has been realized by experiments recently. I think the most popular one is this (PRL 2019). Read the introduction (and refs. therein) to get the "spirit" of the quantum simulation and where this research is likely to expand.

Not the answer you're looking for? Browse other questions tagged architecture experiment decoherence quantum-walks biology or ask your own question.

21
Is Quantum Biocomputing ahead of us?
5
Is it possible to simulate a quantum computer in Virtual Reality? If yes, how?
7
Can the theory of quantum computation assist in the miniaturization of transistors?
13
Does the quantum coherence in the FMO complex have any significance to quantum computing (on a biological substrate)?

13
Does the quantum coherence in the FMO complex have any significance to quantum computing (on a biological substrate)?