What happens to the Bell state qubits after the Quantum Teleporation?

They get measured as part of the teleportation. It doesn't matter what happens to them after that. You can throw them away, reset them back to $|0\rangle$ and re-use them for something else, whatever.

Bell States: The Bell states are four specific maximally entangled quantum states of two qubits. They are in a superposition of 0 and 1 – a linear combination of the two states.

From your question I can exclude that you are not searching an answer what "Bell state measurement" is.

you want to know what happens to two qubits during and after the quantum teleportation. That's a good question and luckely I can answer and break it down for you without missing any detail!

To keep this example clear, I have divided it into 3 phases

You have 2 qubits in the standard basis. One is handed out to Alice (A) and the other to Bob (B). If Alice measures her qubit in the standard base she will get a perfectly random outcome. It could be 0 or 1. If Bob measures his qubit at the exact same time, the outcome would be random too BUT it will be the same as Alice has! So if Alice gets randomly a 1 then Bob has a 1 too. But only at the same time. This perfect correlation leads us to phase 2.

Summarized for simplicity: Alice and Bob share an EPR pair and each took one qubit before they became separated

The mentioned correlation exist through the whole distance and as we know from the definition above, the changing quantum state over distance is called quantum teleportation. This correlation is very special and maybe the two particles "agreed" in advance, when the pair was created (before the qubits were separated), which outcome they would show in case of a measurement. Alice and Bob are able to measure the missing information they need.

Summarized for simplicity: Alice must deliver a qubit of information to Bob. Given Alice's measurements, Bob performs one of four operations on his half of the EPR pair and recovers the original quantum state, to get the information

The afterwards is actually not an afterwards but more like a [new] beginning. Because the information is "measured" during the quantum teleportation. The qubits can then be returned to their standard basis and thus re-used. A new exchange can take place.

Summarized for simplicity: So you can see the third phase here as getting lost in the sand. After Bob recovers the original quantum state, the qubits are ready for re-use.

To make it more visible or clear I made a drawing to understand the 3 phases ((1),(2),(3)) I definded for explanatory example. 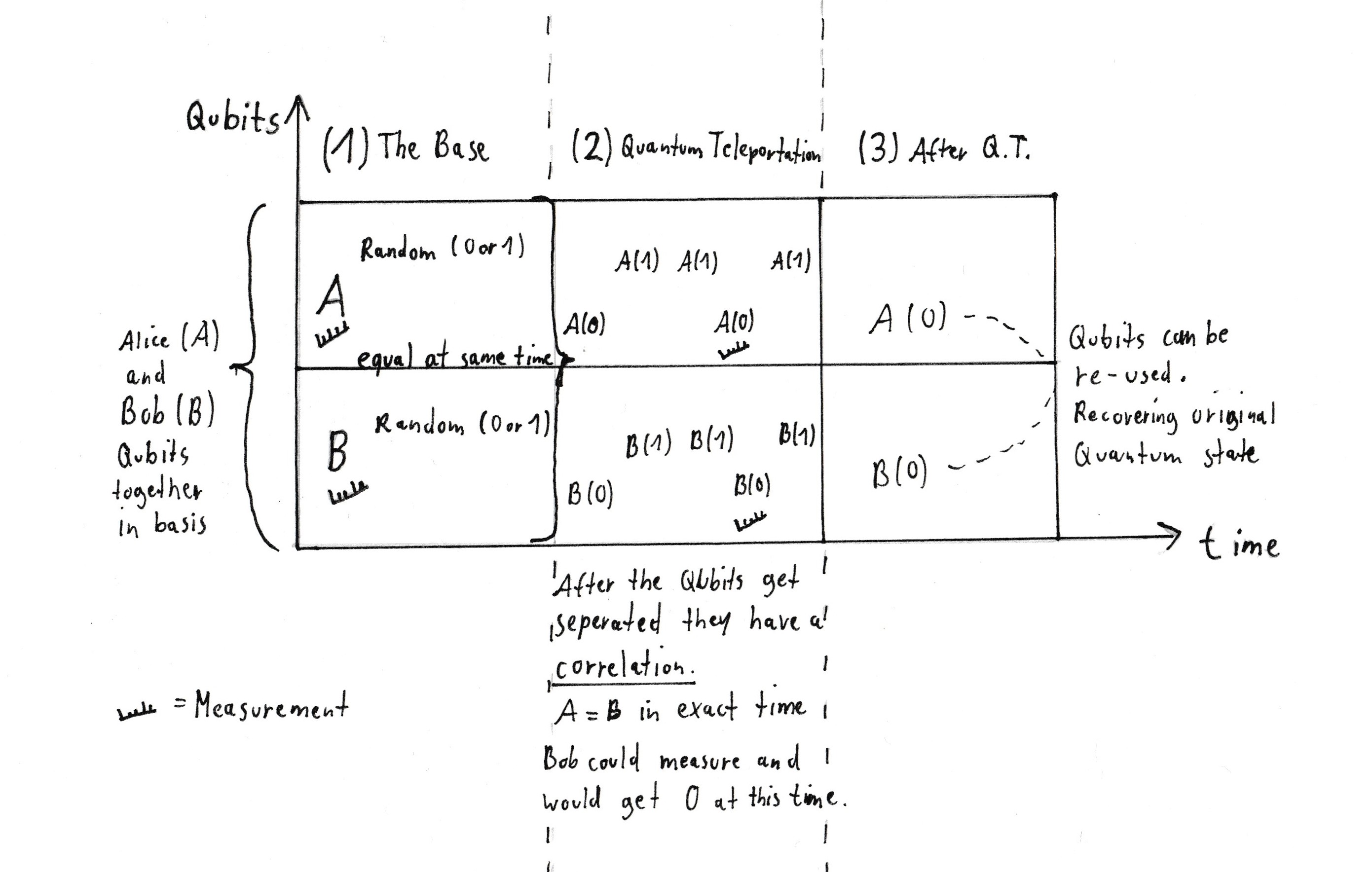 I know this isn't an easy question and not easy to answer but I try to explain the theoretical part playful with the practical part (Bob and Alice). I hope this brought more understanding to the topic and would be happy to receive feedback!

Not the answer you're looking for? Browse other questions tagged entanglement teleportation bell-basis or ask your own question.

10
What happens if two separately entangled qubits are passed through a C-NOT gate?
3
Determining the quantum secret
2
Transforming the first Bell state into the other Bell states
3
What is the property of any entangled pair of qubits?
2
What happens when you send a Bell state through depolarizing channel?
2
What is the representative matrix for a measurement in the Bell-state basis?
2
How does Bell measurement work in the teleportation?
1
How to do error correction after encoded Bell measurement?
2
How to simulate the state of a system after partial measurement?
2
Density matrix after measuring Bell state in CHSH game