Getting exponential sequence of coefficients with not so many $T$-gates

Write $l(\Psi)$ for the largest $p$ such that $\Psi$ has a length-$p$ exponentially increasing coefficient sequence.

Recall that the $T$-count, denoted $\tau(\Psi)$, of a state $\Psi$ is the minimum number of $T$-gates needed in a circuit that creates $\Psi$ from $|0\rangle$ using Clifford $+T$ gates, arbitrarily many ancilla qubits, and post-selective Pauli measurements on those ancillas. I want to construct a set of states with small $T$-count and a large exponentially-increasing sequence.

Note that a circuit composed only of Clifford gates will output a state whose non-zero coordinates all have the same absolute value, so the $T$ gates are somehow "responsible" for creating the exponentially increasing sequence.

With that, we can build quantum circuits $\mathcal{C}_n$ with $2n$ ancilla qubits which look like this here for $n = 3$: 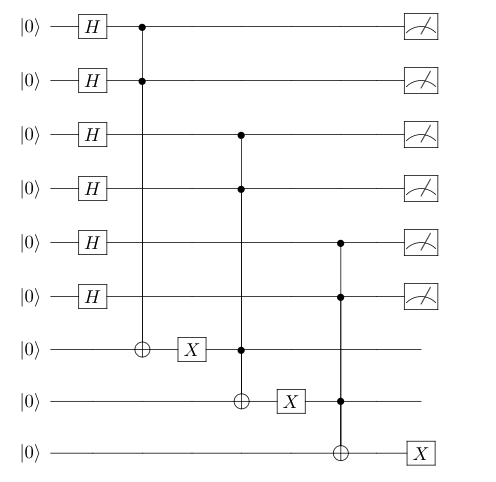 It's clear that this construction generalises: On $n$ qubits we can create a state $\Psi_n$ with an exponentially increasing coefficient sequence of size $ n + 1$ using $2n$ ancilla qubits and $n$ multi controlled NOT gates with 3 controls, giving a $T$-count $\mathcal{O}(n)$, that is, we again have $\frac{l(\Psi_n)}{\tau(n)} = \Omega(1)$.

I would be happy to hear if someone has an idea of other tricks which are similar to the multi controlled NOT gate which I can use to build up circuits creating these exponentially increasing sequences as output.

Suppose you have a chain of length $n$. Then the smallest amplitude in that chain is no larger than $2^{-n}$. But this implies the operations you are applying have a maximum error term $\epsilon$ that is smaller than that, since otherwise they would overwhelm that amplitude. And approximating arbitrary rotations to within $\epsilon$ requires $\Omega(\lg(1/\epsilon))$ T gates. This suggests the T cost of such a state has to be at least $\Omega(n)$, unless you can find a series of easily-approximated rotations whose structure allows you to avoid the bound on arbitrary rotations.

I'm not sure how to take this vague "precision seems too high" idea and turn it into a proper proof, but at the very least it's an interesting obstacle you have to bypass for a solution.

Of course in practice this is all totally irrelevant. Amplitudes that are $2^{2^{10}}$ times smaller than other amplitudes in the system are never ever going to matter observationally. So in practice you'd just approximate the whole thing ridiculously well by doing the first 10 rotations, skip the rest, and call it done.

6
Problem about qutrit teleportation protocol
2
Sketch the quantum logic gates correctly and give a proof for the identity
1
Any two level flip in $n$ qubit system
2
Gate Cost to Transform Superposition of Hamming weight 1 states to superposition of arbitrary basis states?
7
Explicit states with high $T$ count
3
Applying $R^{'\dagger}_{xz}$ in gate teleportation
2
Getting non-Clifford after performing several Clifford gates in qiskit
4
What is the fastest classical simulator for quantum circuits with only Clifford gates?