Is there any difference in effect between a quantum circuit and a carefully constructed analogue one relying on interference? For example, why couldn't I take a series of $N$ carefully shaped pipes, split a sound source between them, and build, say, a quantum Fourier transform circuit with classical versions of Hadamard and phase shift gates? For example, it would be easy to shift phase by extending the length of a pipe with a sufficiently smooth spiral. I recall that you can invert the phase with a reflection or a phase shift set to 1/2 the wavelength of the sound in the pipe. You could split and combine outputs by splitting and combining pipes. Then, instead of tallying up clicks on different channels (as in a quantum computer), you could just measure the power coming through each of the output channels.

I'm not saying this is necessarily practical--if nothing else you'd obviously have better bandwidth at higher frequencies than sound could propagate through most media. I got the sense there had to be some difference in effect between this hypothetical scenario and a real quantum computer. Could anyone help identify it or else confirm the effect is, in fact, the same?

The problem is that the classical analogue has to have physical elements and operations for each amplitude, instead of for each qubit.

Here is a quantum circuit for the 16-amplitude Fourier transform:

Here is a butterfly diagram for the 16-state Fourier transform (from here): 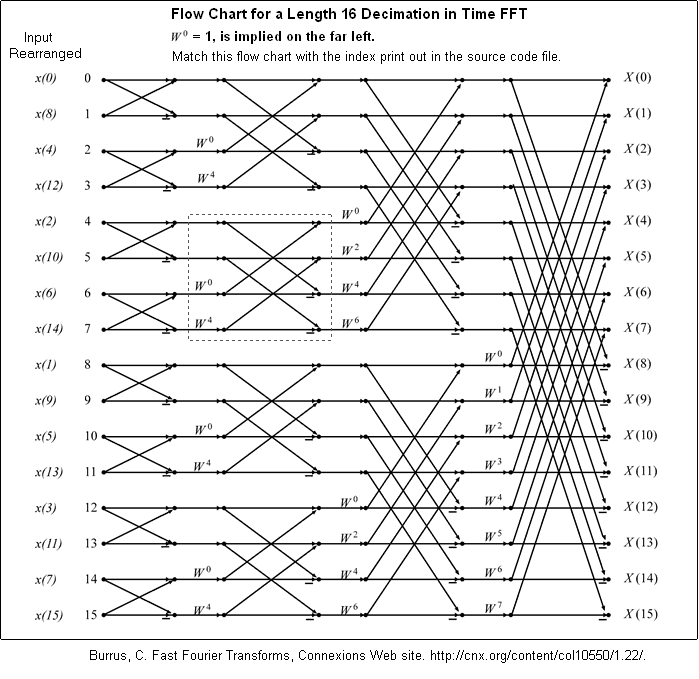 Each hadamard operation in the quantum circuit is an entire butterfly layer in the classical diagram.

A classical system has to have storage and/or operations for each line in the butterfly diagram. Whereas a quantum computer only needs the storage and operations from the smaller quantum circuit. This disparity gets exponentially worse as the number of qubits goes up.