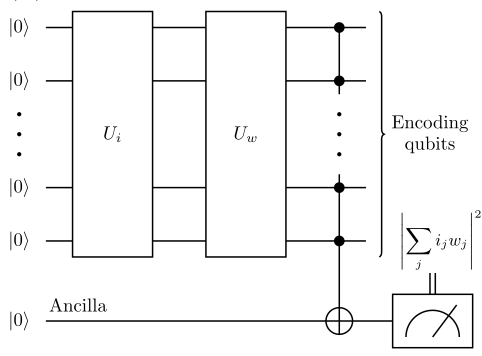 In this paper, this figure shows the perceptron model used for quantum neural network. When realizing the inner product between weight vector and input vector, it defines a unitary transformation $U_W$, such that $U_W|\phi_W\rangle = |1\rangle^ {\otimes N} $.

My question is, what's the intuition behind this? Why should the quantum state be $|1\rangle^ {\otimes N} $?

The reason for requiring the final state to be $|1\rangle^{\otimes N}$, is that in this way you can easily propagate the information on an ancilla (i.e. additional) qubit using a multi controlled CNOT, with the target on the ancilla. In this way, measurements on the ancilla yield outcome $|1\rangle$ with probability given by the desired inner product $\big|\sum_j i_jw_j\big|^2$. In this model of a quantum perceptron, the ancilla measurement indicates the neuron's activation value: the higher the number of $|1\rangle$ measured, the higher the activation.

Note that you could also require that $U_w |\phi_w\rangle$ = $|0\rangle^{\otimes N}$, and then use again a multi controlled CNOT on the ancilla, but with the control states set to |$0\rangle$ instead of $|1\rangle$, and obtain the same result. This operation is usually depicted in the quantum circuit representation with the control circles colored white instead of black.

Anyway, the idea for such a scheme, it is that is then very natural to consider a quantum neural network structure: instead of measuring the ancilla qubit, you can input that qubit to a following layer of neurons, thus creating a fully coherent (because you don't need to measure) feed-forward architecture.

That's one part of the story.

So, you can see that evaluating the inner product $\langle \phi_w | \phi_i\rangle$ is equivalent to first apply $U_i$ to the blank register $|0\rangle^{\otimes N}$; then apply the operator $U_w^\dagger$ on the resulting state; and eventually measure the state and count the number of $|11...1\rangle = |1\rangle^{\otimes N}$ outcomes.
The explicit expression for $U_w$ is essentially the same of the operation $U_i$, with the obvious change of the parameters $\vec{i} \rightarrow \vec{w}$, and with the addition of a final layer of $X$ gates on all the qubits, in order to send them to the desired state $|1\rangle^{\otimes N}$. This method of computing inner values of quantum states is now often called as compute-uncompute method, with the only difference that in this case the final value is stored on the coefficient of the $|1\rangle^{\otimes N}$ state instead of state $|0\rangle^{\otimes N}$, as is the case for the standard compute-uncompute method.

Hope this helps you :)

Not the answer you're looking for? Browse other questions tagged circuit-construction quantum-enhanced-machine-learning quantum-neural-network or ask your own question.

7
SWAP gate(s) in the $R(\lambda^{-1})$ step of the HHL circuit for $4\times 4$ systems
0
Why is Farhi and Neven's architecture described in "Classification with Quantum Neural Network on near term processors" called a Neural Network?
4
Label function for a QNN designed to classify bit strings
6
Understanding the definition of quantum neural network of Abbas et al. 2020
5
Implement a projection operator as a quantum circuit