What is the minimum integer value to make quantum factorization to be worthwhile?

Let us assume that we have quantum and classical computers such that, experimentally, each elementary logical operation of mathematical factorization is equally time-costing in classical and in quantum factorization: Which is the lowest integer value for which the quantum proceeding is faster than the classical one?

Let us assume that [...] each elementary logical operation of mathematical factorization is equally time-costing in classical and in quantum factorization

If we assume that the modular exponentiation takes exactly as long on a quantum computer as it would on a classical computer, then the transition where the quantum computation became better would happen at a very low number. Computing modular exponentiations is very fast, classically, because you can use repeated squaring. I would wildly estimate the crossover to happen even before you even get to 30 bit numbers (numbers over a billion).

But quantum computers are not going to do math nearly as fast as classical computers. For example, on my laptop, I can do a 1000-bit modular exponentiation in python in a fraction of a second. But on foreseeable quantum computers, it would take hours or days. The issue is the massive (massive) difference in the cost of an AND gate.

On a classical machine, performing an AND is so inconsequential that we don't even really think about it when programming. It's way more likely for you to think in terms of counting 64-bit additions than in terms of counting AND gates, when determining the cost of your algorithm. But on an error corrected quantum computer, performing an AND (usually temporarily, via a Toffoli) tends to be expensive. For example, you can do it by distilling four high-quality $|T\rangle$ states. I won't go into the numbers... suffice it to say that on early error corrected machines you would be very happy to get a million T states per second.

So suppose we get a million T states per second, and we want to convert this into a rate of 64-bit additions to compare with the classical machine. A 64-bit addition requires 64 AND gates, each requiring 4 T gates. 1 million divided by 4 divided by 64 gives... about 4KHz. For contrast a classical machine will easily do a billion additions per second. Quantum adders are a million times slower than classical adders (again, wildly estimating, and keep in mind this number should improve over time).

Another factor worth considering is the differing costs of quantum and classical computers. If you have a hundred million dollars, and you're choosing between one quantum computer and a thousand classical computers, that factor of 1000 has to be accounted for. In this sense, we could say quantum adders are a billion times less efficient than classical adders (in FLOPS/$).

A constant factor penalty of a billion is normally an immediate deal breaker. And for quantum algorithms with a mere quadratic advantage (like Grover), I contend that it is in fact a deal breaker. But Shor's algorithm gets exponentially better relative to the classical strategy as you increase the number of bits in the number to factor. How many bits before we eat away that "measly" 10^9 constant with our exponential growth in advantage?

Consider that RSA-640 was factored in 2005 using ~33 CPU years. A quantum computer should be able to do that number in under a day. If you have a thousand classical computers working on the problem, they'd finish in about two weeks. So it seems like quantum is winning by 640 bits, but only by an order of magnitude or three. So maybe the cutoff would occur somewhere around 500 bits?

Anyways, I know this is not a hard and fast answer. But hopefully I've conveyed some sense of the quantities I would think about when comparing classical and quantum. Really no one knows the constant factors involved yet, so I'd be surprised if anyone could give you a proper estimate better than "somewhere in the hundreds of bits".

As I mentioned in the comments, a very precise answer will likely depend on a lot of technical choices which are somewhat arbitrary. It is likely to be more important to obtain an order-of-magnitude estimate, and to account for as much as possible in making it.

This answer is intended not as a definitive answer, but as a step in the right direction by reference to the existing literature (though admittedly over a decade old by now), specifically:

Van Meter, Itoh, and Ladd attempt to compare the performance of Shor's algorithm with available computing technology performing the Number Field Sieve (the best known classical algorithm for factorisation). I have not had the time to plumb through the details of the paper — a superior answer could likely be obtained by doing so — but Figure 1 of that article allows us to make a reasonable numerical estimation: 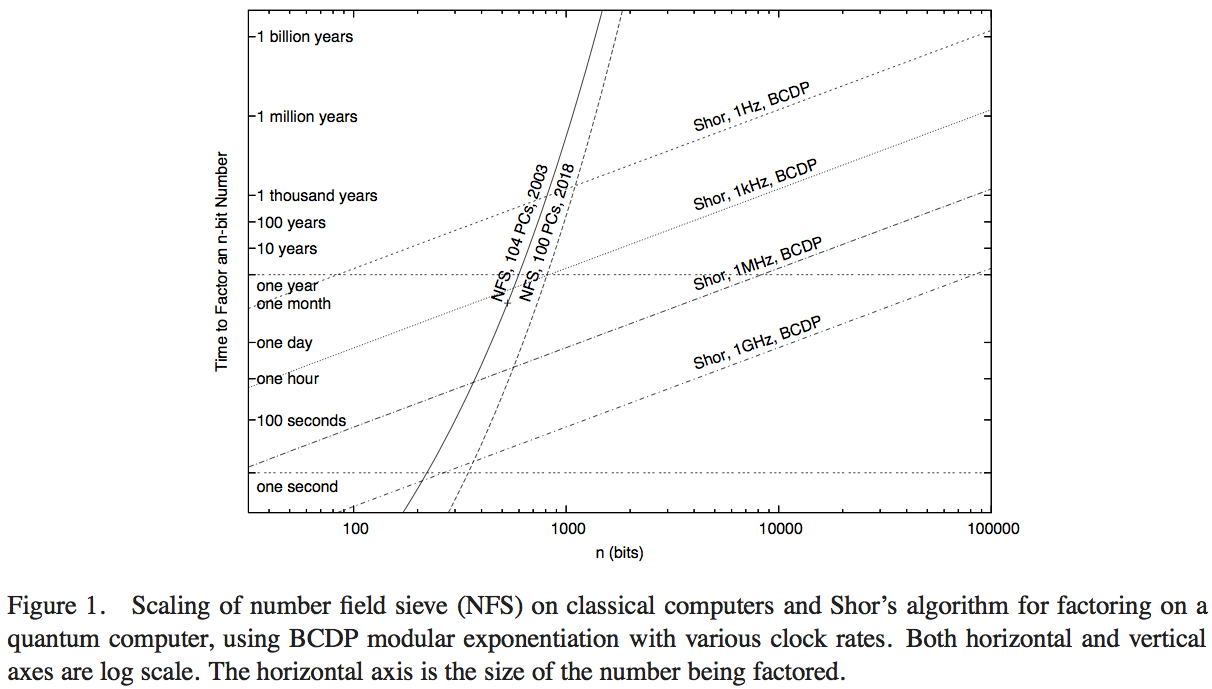 Here, the steep curves represent the computing time of classical computing networks. The curve labeled 'NFS, 104 PCs, 2003' seems to indicate computations (and the projected computing time) of one hundred and four personal computers circa 2003, as reported by RSA Security Inc. in 2004 [http://www.rsasecurity.com/rsalabs/node.asp?id=2096].

We will carry out a Fermi calculation. Let us assume that the curve corresponds to a computation on 104 essentially identical computers, and let us presume that $n$ computers carrying out number field sieve can carry out $n \cdot v$ computations per second of Number Field Sieve, where $v$ is the number of operations per second which a single computer can carry out. A quick web search suggests the speed of a good commercially available PC circa 2003 was about 2GHz. Assuming that the computers were performing one logical operation per clock cycle, the classical computation in 2003 was effectively operating at about $2 \times 10^{11}$ operations per second. A hypothetical benchmarking of Shor's algorithm would have to be made against a quantum computer performing at a comparable clock speed.

Unfortunately the lowest curve for quantum algorithms represents a clock-rate of $10^9$, so the point at which a hypothetical realisation of Shor's algorithm would surpass this performance is not on the graph shown. However, there is some interesting information which is shown.

The increase in the crossing points against quantum computations, from the computation in 2003 to the projected one in 2018, representing a clock-speed boost of 1000, is a factor of about 5/3. From this we can estimate that the computational advantage to the size of numbers that can be quickly solved by a classical computer, due to a speed increase of a factor of 200, is roughly 7/6. Then we can estimate that the crossing point of a single 1GHz classical computer performing NFS, with a 1GHz quantum computer performing Shor's algorithm, is at about 170 bit numbers.

The bottom line — a precise answer will depend on many technical assumptions which can change the precise result significantly, so it is better to seek a rough estimate. But this question has been researched at least once before, and making some number of assumptions and extrapolations on performance based on classical performance in 2003, it seems that Shor's algorithms will outperform the best known classical algorithm on an operation-by-operation basis for numbers around 170 bits.

Not the answer you're looking for? Browse other questions tagged algorithm speedup or ask your own question.

8
Does quantum computing provide any speedup in evaluation of transcendental functions?
27
Has there been any truly ground breaking advance in quantum algorithms since Grover and Shor?
8
Quantum algorithms for problems outside NP
8
Grover algorithm for a database search: where is the quantum advantage?
7
What kind of boolean functions are faster to compute on qc?
6
What is the complexity of estimating the expectation value of an observable?
1
Would quantum computers be more efficient at solving circular reference problems than classical computers?