Why is there no angle for the $z$ axis in the Bloch sphere? 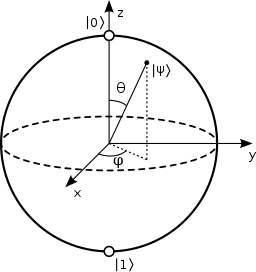 This is because we are using a spherical coordinate system. You can think of this coordinate system as specifying a radius, then two angular coordinates $\theta$ and $\phi$. Pure single-qubit states have a Bloch vector with radius equal to unity, so they only need two more coordinates to fully specify the direction in which the vector points.

Another way of approaching the problem: three-dimensional vectors have three free parameters. Once we specify a radius, we only need two more parameters to fully specify the vector.

Not the answer you're looking for? Browse other questions tagged mathematics textbook-and-exercises bloch-sphere or ask your own question.

1
How do two qubit states differing by a global phase relate to each other?

11
Rotating about the y- or z-axis of the Bloch sphere
13
Why is an entangled qubit shown at the origin of a Bloch sphere?
10
Is there any online Bloch sphere simulator?
4
How are measurements on $Z$ and $X$ axes interpreted in the Bloch sphere?
2
Bloch sphere, where are magnitude and phase of a qbit?
1
$\lambda$ parameter for U3 gate in qiskit Bloch sphere visualisation
5
Show that the Hadamard gate is equivalent to a 180 degree rotation of a certain axis
5
Can I simultaneously plot 2 vectors on a single Bloch sphere and rotate the angle of visualization?
2
Why is the angle of Rz(π/4) Rx(π/4) an irrational multiple of π