Is there a way to save vectorized images in Qiskit? I am using

They type of the image is a pdf, but it looks like a png exported as a pdf. For reference I attach here a figure of the differences I point out. 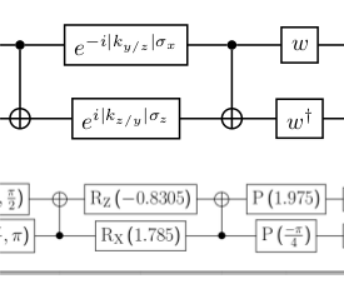 Hopefully some differences can be noticed. The top subfigure was made with Quantikz, while the other directly with Qiskit. The difference that the top is vectorized and the other looks like it isn't.

The problem is solved using what luciano pointed out. I just want to add that the resulting pdf circuit may still need some cleaning. Apparently the figure is not "tight framed", I attach an example of what I mean 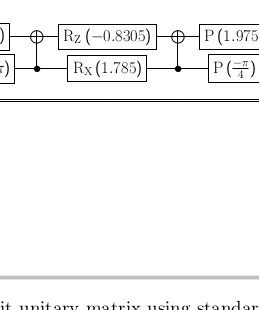 The letters that appear at the bottom are part of the figure caption. One can see that there's a huge space between the image and the caption, along with a border that frames the image.

In an interactive console (such a Jupyter notebook), you can run the following:

This will create a file.pdf in actual PDF format.

(I understand this is very unintuitive, I submitted a fix to it)

Not the answer you're looking for? Browse other questions tagged programming qiskit or ask your own question.