Why are commuting density operators said to be "classical states"?

In quantum information it is commonly said that a set of states $S=\{ \rho_i \}_i$ is classical if $[\rho_m, \rho_n] = 0, \,\forall \rho_m,\rho_n \in S$. This is meant in the sense that all observed behaviors (results from quantum measurements on the states in $S$) could be reproduced by using only a classical variable. Additionally, if the support of $S$ has dimension $d$, you would only need (classical) dits to do so.

What is a good justification for this? Is this considered a definition or is it really a result?

Edit: as asked, here is an example of the affirmation made in the first paragraph (taken from https://arxiv.org/abs/1207.2574):

The lemma in question is below. But as far as I understand, it only shows that given the assumption that the probabilities are reproducible with classical (i.e. pair-wise commuting) states, then "classical measurements" (defined likewise) are also enough. Am I missing something here? 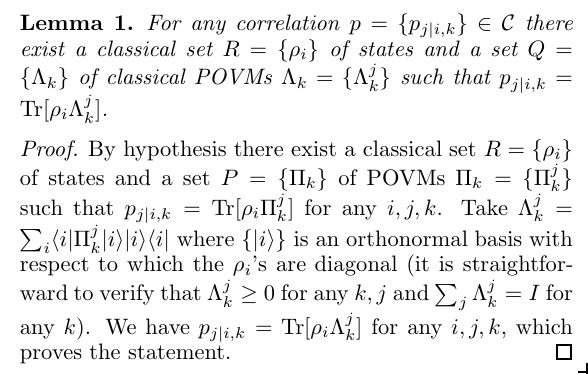 The type of (non)classicality discussed in this paper is thus a specific one that is suited for the context at hand. While certainly in the spirit of nonclassicality as discussed in the context of Bell nonlocality, it is not exactly the same idea I think. The point seems here to rule out the possibility that the observed correlations cannot be explained by Alice simply sending a classical message to Bob. More details below.

Very rough summary of the context

The setup consists of Alice preparing a state and Bob measuring it. Alice chooses the value of some index $i\in[1,M]$, and sends a state $\rho_{i,\lambda}$ accordingly. Here $\lambda$ denotes a hidden variable; this is added to take into account the possibility of Alice and Bob being classically correlated beforehand. Bob then performs some measurement corresponding to a POVM $\Pi_{k,\lambda}$, for some $k\in[1,K]$ he decides, and gets an outcome $j\in[1,N]$.

They call these correlations "classical" if, roughly speaking, they can be written as $p_{j|i,k}=\operatorname{Tr}[\rho_i\Pi^j_k]$ for some "classical set of states" $\{\rho_i\}_i$.

So... why commuting states?

I think the point of this definition is that if the states commute then there is no need for Alice to actually send quantum states to Bob. She might as well just send a classical message. Indeed, the authors point out after Lemma 1 that

A possible argument to see why this is the case, loosely inspired by the proof of Lemma 1 (though in fairness I haven't really read the paper or the lemma in depth), is the following. If the states are pairwise commuting, $[\rho_i,\rho_j]=0$, then they can be simultaneously diagonalised: $$\rho_i = \sum_\ell \lambda_{i\ell}|\ell\rangle\!\langle \ell|,$$ for some $\lambda_{i\ell}\ge0$ and an orthonormal basis $\{|\ell\rangle\}_\ell$. We then have $$p_{j|i,k}=\operatorname{Tr}[\rho_i \Pi^j_k] = \sum_\ell \lambda_{i\ell} \langle \ell|\Pi^j_k|\ell\rangle.$$ What this is telling you is that, to reproduce the correlation, it is enough for Alice to send a classical message, and more specifically the value of $i$, to Bob's device. Bob's device will then sample one of the (fixed beforehand) states $|\ell\rangle$, with probabilities $\lambda_{i\ell}$, and measure it with the POVM $\{\Pi^j_k\}_j$, obtaining an outcome $j$.

For example, Alice presses the button "$i=1$". Her box sends a classical message saying "1" to Bob's box. Bob's box is then programmed to pick one of the states $|\ell\rangle$. More specifically, it will pick the state $|\ell\rangle$ with probability $\lambda_{i\ell}$ (again, these probabilities will have been chosen beforehand, when the boxes were calibrated). Say the box picks the value "$\ell=3$". Now, if Bob presses the button "$k=2$", his Box will perform the measurement corresponding to the POVM $\{\Pi_2^j\}_j$ on the state $|3\rangle$. The result will be some value of $j\in[1,N]$. Say $j=36\le N$. Repeating this circus an "infinite" number of times, Alice and Bob will collect the results and find the correct values of the conditional probabilities $p_{j|i,k}$.

When this type of thing is possible, then we say that the correlations $p_{j|i,k}$ are "classical", in the sense that no actual quantum states needed to be exchanged to get it.

On the other hand, you have a set of states that all pairwise commute. A set of pairwise commuting matrices can be simultaneously diagonalized. (You can show this by showing they must have the same eigenspaces). Therefore there exists some distinguished basis (orthonormal because we're working with Hermitian operators) in which all of these matrices are diagonal, recovering the above definition.

Not the answer you're looking for? Browse other questions tagged quantum-state density-matrix nonclassicality or ask your own question.