I'm trying to figure out how to transform the SWAP state gate into the square root of SWAP gate using only CNOTs or single qubit gates.

As you might guess, I'm new to this whole concept, but I'm having a hard time grasping how I can get a 1 or 0 (values in the SWAP gate matrix) to e^(i pi / 4) that are present in the square root of SWAP matrix.

I tried Kronecker product of Pauli Y and Hadamard, but I'm only getting e^(i pi / 2) elements.

Any ideas on a simple circuit? Thank you!

In cirq, you can get decompositions like this from cirq.two_qubit_matrix_to_operations. It will use CZs instead of CNOTs, but a few Hadamards around the CZs fixes that.

This is a swap: 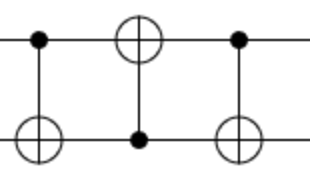 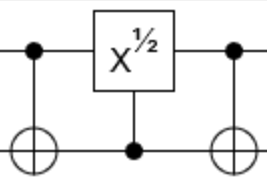 Lastly you'd fuse some of the single qubit gates, but this depends on your gate set. At the very least you'd combine the T gate and the S^-1 gate into a T^-1 gate because they commute across the control. For a harder challenge, see if you can figure out how to merge the S^-1 in the top right with the X^(1/4) in the top left creating an X^(-1/4) without increasing the number of other gates.

Not the answer you're looking for? Browse other questions tagged quantum-state circuit-construction or ask your own question.

8
Understanding the Group Leaders Optimization Algorithm
7
Constructing a circuit for $C^1(U)$ for rotation operators with TWO single qubit gates and CNOT gate
1
Any two level flip in $n$ qubit system
1
What is the shortest sequence of decomposition a given single-qubit unitary gate
4
Generate a 3-qubit SWAP unitary in terms of elementary gates
3
How can I construct a 2-qubit state using single qubit gates and CNOT gate?
3
Which states can reached using single-qubit Clifford gates?
3
How to create CNOT from an entangling gate and arbitrary single-qubit gates?
3
How to create a Bell state with asymmetric amplitudes using single-qubit and CNOT gates?
4
There exists an efficient gate that swaps values of different superposition kets?