What would be the simplest addition that would make the D-Wave architecture universal?

The D-Wave system, as I understand it, allows us to program Ising models and to find their ground states. In this form, it is not universal for quantum computation: it can not simulate a circuit model quantum computer.

What would be the simplest thing that could be done to make it universal? What are the reasons why such a thing has not been implemented?

XX couplers are necessary to make an quantum annealing universal.

As for fabricating them, I’m not too familiar with the hardware issues. Perhaps someone else can comment on that.

In the accepted answer, it is said that XX couplers are "necessary".
However YY couplers would also do the job. This is because of te YY gadget explained in section VI of this paper.

Out of all four of these options (XX, YY, XZ, YZ) for added couplers that would make D-Wave's machines universal, one of them has already been implemented in hardware by D-Wave: the YY coupler.

It was presented at the AQC conference in 2018: 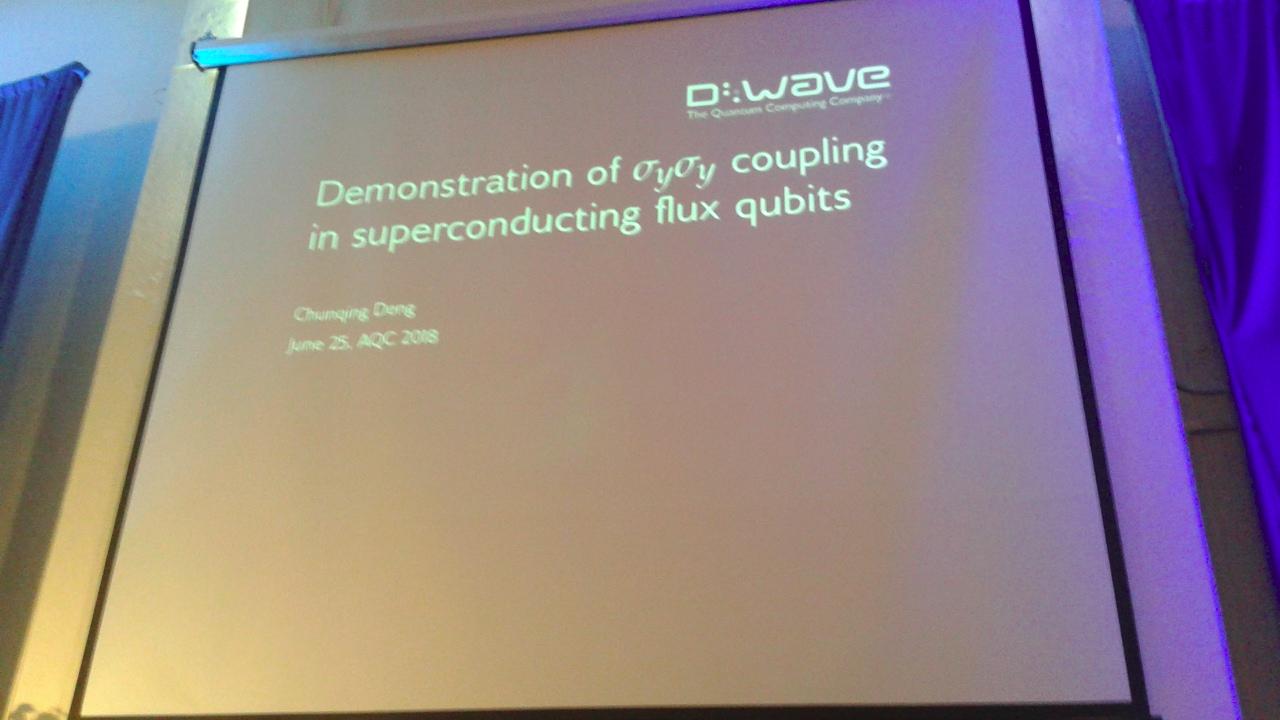 However there are some restrictions on the control of these YY terms, and the physical reason for this is the subject of my question here: In D-Wave's universal quantum computer, why does the YY term have to be driven along with the linear X term?

What would be the simplest thing that could be done to make it universal?

[0062] It has been established that local lattice spin Hamiltonians can be used for universal adiabatic quantum computation. However, the 2-local model Hamiltonians used are general and hence do not limit the types of interactions required between spins to be known interactions that can be realized in a quantum processor. The 2-local Ising model with 1-local transverse field has been realized using different of technologies.

[0063] This quantum spin model is thought unlikely to be universal for adiabatic quantum computation. See discussion in S. Bravyi et al., 2006 arXiv:quant-ph/0606140v4 or Quant. Inf. Comp. 8, 0361(2008). However, it has been shown that adiabatic quantum computation can be rendered universal and belongs to the Quantum Merlin Arthur complexity class, a quantum analog of the NP complexity class, by having tunable 2-local diagonal and off-diagonal couplings in addition to tunable 1-local diagonal and off-diagonal biases.

Note: Refer to the Patent for complete details.

What are the reasons why such a thing has not been implemented?

From: "Quantum Information Processing with Superconducting Circuits: a Review" by G. Wendin (8 Oct 2017), on page 77:

The D-Wave Systems machines are built top-down - scaling up is based on flux qubits and circuits with short coherence time. The technology is based on classical Nb RSFQ circuits combined with Nb rf-SQUID qubits, and forms the basis of the current D-Wave processors. The architecture is based on a cross-bar network of communication buses allowing (limited) coupling of distant qubits. The qubits are operated by varying the dc-bias, changing the qubit energies and qubit qubit couplings.

As a result, the coherence and entanglement properties have to be investigated by performing various types of experiments on the machines and their components: Physics experiments on the hardware, and ”benchmarking” of the performance by running a range of QA schemes.

During the last three years, the topic has rapidly evolved, and by now a certain common understanding and consensus has been reached. Based on the discussion in some recent papers, the situation can be summed up in the following way:

• The behaviour of the D-Wave machines is consistent with quantum annealing.

• No scaling advantage (quantum speedup) has so far been seen.

• QA is efficient in quickly finding good solutions as long as barriers are narrow, but ultimately gets stuck once broad barriers are encountered

• The Google D-Wave 2X results showing million-times speedup are for native instances that perfectly fit the hardware graph of the device.

• For generic problems that do not map well onto the hardware of a QA, performance will suffer significantly.

• Even more efficient classical optimisation algorithms exist for these problems, which outperform the current D-Wave 2X device for most problem instances. However, the race is on.

• With improved engineering, especially faster annealing and readout, the time to perform a quantum annealing run can be reduced by a factor 100x over the current generation QA devices.

• However, misspecification of the cost function due to calibration inaccuracies is a challenge that may hamper the performance of analogue QA devices.

• Another challenge is the embedding of problems into the native hardware architecture with limited connectivity.

• There is the open question of quantum speedup in analogue QA.

• QA error correction has been demonstrated and may pave a path toward large scale noise-protected AQO devices.

• Improved machine calibration, noise reduction, optimisation of the QA schedule, larger system sizes and tailored spin-glass problems may be needed for demonstrating quantum speedup. However what is hard may not be easy to judge.

Note: Refer to the paper for complete details.

The Patent is somewhat more cryptic in it's explanation:

The simulated coupling described in FIG. 9 and FIG. 10 allows multiple types of coupling to be realized by fewer actual coupler types. This can provide greater versatility in a quantum processor where the architecture is best-suited for specific types of couplers. For instance, a superconducting quantum processor that, for whatever reason, is best-suited to implement only ZZ-couplers and XX-couplers may incorporate simulated coupling through mediator qubits to realize the effects of simulated XZ and ZX coupling.

Those of skill in the art will appreciate that, for the purposes of realizing the qubit-coupling architectures taught in the present systems, methods and apparatus, the various embodiments of XX-, ZZ-, XZ-, and ZX-couplers described herein represent non-limiting examples of coupling devices. All of the coupling devices described in the present systems, methods and apparatus may be modified to accommodate the requirements of the specific system in which they are being implemented, or to provide a specific functionality that is advantageous in a particular application.

The present systems, methods and apparatus describe the physical realization of universal adiabatic quantum computation by the implementation of at least two different coupling mechanisms in one processor architecture. Each coupling mechanism provides coupling between a first and a second basis (for example, coupling between X and X, X and Z, or Z and Z), thereby defining a “coupled basis” (for example, XX, XZ, or ZZ). In accordance with the present systems, methods and apparatus, qubit-coupling architectures that each include at least two different coupled bases, where at least two different coupled bases do not commute, are used to realize the Hamiltonians for universal adiabatic quantum computation. For example, the various embodiments described herein teach that universal adiabatic quantum computation may be physically realized by the simultaneous application of off-diagonal couplers in a qubit-coupling architectures. Those of skill in the art will appreciate that this concept may extend to couplers that include the Y-basis, such as XY-, YX-, YY-, ZY-, and YZ-couplers.

This specification and the appended claims describe physical implementations of realizable Hamiltonians for universal adiabatic quantum computers by demonstrating universal qubit-coupling architectures. There is a common element to the embodiments of universal coupling schemes described herein, and that is the implementation of at least two different sets of coupling devices between qubits, where the respective bases coupled by the two different sets of coupling devices do not commute. Those of skill in the art will appreciate that such non-commuting couplers may be realized in a variety of different embodiments and implementations and all such embodiments cannot practically be disclosed in this specification. Thus, only two physical embodiments, the XX-ZZ coupling architecture and the XZ-ZX coupling architecture, are detailed herein with the recognition that anyone of skill in the relevant art will acknowledge the extension to any quantum processor architecture implementing non-commuting couplers. Furthermore, those of skill in the art will appreciate that ertain quantum algorithms or hardware constraints may impose minimum requirements on the number of effective qubits in the quantum processor and/or the number of couplers. The present systems, methods and apparatus describe the use of XX and ZZ couplers to simulate XZ and ZX couplers, as well as the use of XZ and ZX couplers to simulate XX and ZZ couplers, thereby proving that a pair of non-commuting couplers in a quantum processor may be used to simulate other coupler schemes.

[My comment: Basically, there's only so much room; and improvments are planned.]

In the Application it's slightly less cryptic:

[0129] Readout is likely more challenging in AQC than in GMQC. Within the latter paradigm, all qubits are isolated at the end of a computation. Consequently, one can independently read each qubit in a GMQC processor. In contrast, AQC terminates with the target Hamiltonian being asserted. When the Hamiltonian contains off-diagonal elements, read out for AQC can present a challenge. If the readout process requires the qubit register wavefunction to collapse, then that state will no longer be an eigenstate of the target Hamiltonian. Therefore, it is desirable to devise a method to simultaneously project the states of all qubits in an AQC processor in the presence of finite biases and couplings.

Not the answer you're looking for? Browse other questions tagged d-wave circuit-construction universal-gates or ask your own question.

6
What are XX, YY, YZ etc. couplings?
11
Does the D-Wave 2000Q satisfy DiVincenzo's criteria?
6
In D-Wave's universal quantum computer, why does the YY term have to be driven along with the linear X term?

14
What is the quantum circuit equivalent of a (delayed choice) quantum eraser?
14
Do multi-qubit measurements make a difference in quantum circuits?
8
Requirements for Achieving a Quantum Speedup
6
What are XX, YY, YZ etc. couplings?
8
Is there a simple, formulaic way to construct a modular exponentiation circuit?
5
Stabilizer circuit synthesis via Clifford gates