How to reason about absorbing Pauli Product rotations into measurements? 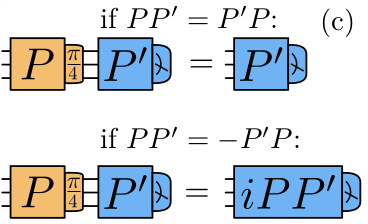 How would you prove these equations? In particular, I am looking for a proof that will help me reason about what happens if I measure say just the first qubit after performing a multi qubit orange box. For example, how would I absorb the orange box into the measurements in the following? 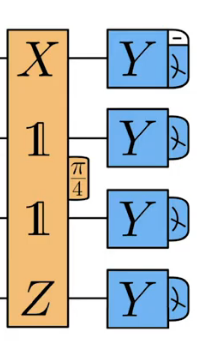 Let us use the above reasoning sequentially:

Note that we obtained an entangling measurement between the first and the fourth qubit. This is in fact a Bell measurement as the joint eigenvectors of $X\otimes X$ and $Z\otimes Z$ are the four Bell states $\{|00\rangle \pm |11\rangle, |01\rangle \pm |10\rangle\}$.

To be safe, you likely want to use the state channel duality to ensure the simulation works for all states instead of just one state.

0
How do I convert a Quantum Circuit into a qobj
2
How to divide one quantum circuit into multiple sub-circuits in qiskit?
3
Getting exponential sequence of coefficients with not so many $T$-gates
3
How to perform a controlled Pauli string rotation gate?
1
How to decompose a multi qubit Clifford unitary into a sequence of clifford gates
1
how to apply pauli string depending on multiple control qubits (qiskit or stim)
2
How to translate a 4-qubit Grover's algorithm circuit into a state Matrix?