I am reading a paper on Quantum Computing. What does it mean when authors says "$\log(m)$-qubits. I know what does $n$-qubit mean where $n$ is positive integer, but $\log(m)$ may not be an integer, in that case how would we define $\log(m)$ qubit. 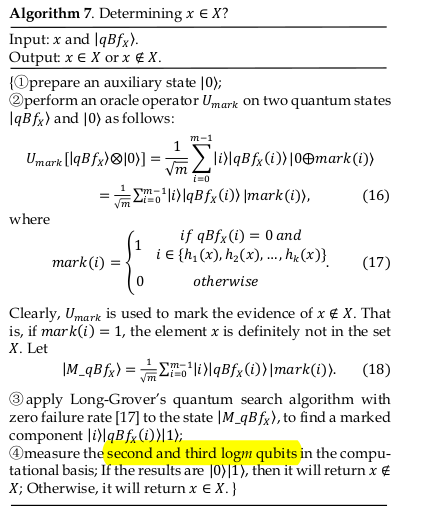 What is being described is an algorithm, and in step 4 of the algorithm, exactly $\log_2 m$ qubits are needed, not "$\mathcal{O}(\log_2 m)$ qubits" which means $\le C\log_2 m$ qubits for a positive constant $C$ and for sufficiently large $m$.

They also describe what happens to the "second $\log_2 m$ qubits" elsewhere.

It's just describing a specific number of qubits on which you're doing, for example, a measurement. This indicates that $m$ ought to be a power of 2 in the algorithm. You can read the algorithm in more detail and try it in full for small values of $m$ to get a feel for why that might be.

Traditionally in computer science, one looks only at the asymptotic complexity of algorithms. Logarithms to different (constant) bases are asymptotically equivalent, so the base is usually omitted, and floor and ceiling operations don't affect the complexity, so they're usually left out.

Given the current state of quantum computing hardware, it would probably make sense to do a more careful analysis of the exact minimum qubit requirements of quantum algorithms, but old habits die hard.

Not the answer you're looking for? Browse other questions tagged algorithm notation or ask your own question.

13
Quantum Supremacy: How do we know that a better classical algorithm doesn't exist?
9
How many logical qubits are needed to run Shor's algorithm efficiently on large integers ($n > 2^{1024}$)?
3
Interpretation of specific Hamiltonian operator
6
What is the general method for creating real gate sequences from mathematical algorithms?
2
How does this expression from the VQLS paper result in a CZ-gate?
1
Question about theorem 5 of the Quantum Counting, Brassard et al. paper
11
What does the paper "Training Variational Quantum Algorithms Is NP-Hard (Phys. Rev. Lett. 127, 120502)" mean?
11
Review paper on depth, qubits and $T$ gates number on Clifford+T decomposition for various "typical" algorithms
5
Is it essential to apply Quantum Singular Value transformation twice for Hamiltonian simulation?