What is a "temporal" or "timelike" logical error in the surface code?

There are several reasons for why $\Theta(d)$ rounds are necessary and sufficient, and the one which baffles me is due to "temporal" or "timelike" logical error. Specifically, one can imagine a 3D space-time "syndrome graph" or "decoder graph", where time goes upwards. A "temporal" or "timelike" logical error is a path that links the bottom boundary with the top boundary.

I find it difficult to appreciate the consequence of such error, either in a lattice surgery circuit, or in an identity circuit without computation. I guess my issue is that I tend to project such bottom-to-top path onto the 2D spacelike plane, and then simply treat it as a spacelike error.

Specifically, I tend to focus on the post-correction residual data error $R$ and decompose it as $R=L\cdot E$, where $E$ is an operator with the same syndrome as $R$ and with minimum weight, and $L$ is a logical operator. I care about two probabilities:

I understand that $p$ and $q$ both depend on the number of measurement rounds. But I don't see why $\Theta(d)$ is necessary and sufficient for (a) $\lim_{d\rightarrow\infty}p=0$, or (b) $q$ decays exponentially with $|E|$. (Assume iid circuit noise.)

Can anyone elaborate why a bottom-to-top path is an issue, either in a lattice surgery circuit, or in an identity circuit without computation?

What is a “temporal” or “timelike” logical error in the surface code?

I find it difficult to appreciate the consequence of such error, either in a lattice surgery circuit, or in an identity circuit without computation.

You're correct that an undetectable timelike error can't hurt a typical identity circuit. However, this is only because identity circuits don't move the logical observable around.

Problems only arise when the timelike boundaries are not of the same type as the observable you are tracking. This necessarily means the observable is partially spacelike. It has to move to the side because it can't terminate on a boundary of the opposite type. Which allows timelike errors to pierce it: 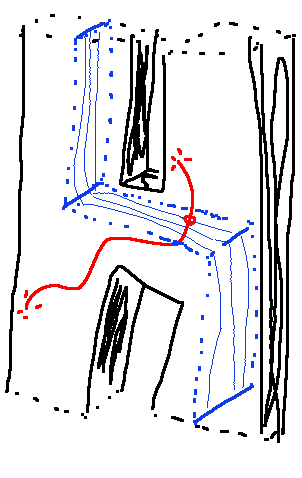 Can anyone elaborate why a bottom-to-top path is an issue, either in a lattice surgery circuit, or in an identity circuit without computation?

To be clear: there's not really anything moving on the quantum computer. You're just changing some tracking information in the classical control system. But you have to update the tracking information correctly. You need to compute the products of all of the stabilizers in the area you want to move the observable across, because this tells you what the sign on the new tracked observable should be compared to the sign of the old tracked observable.

And, of course, real errors are often complicated combinations of spacelike and timelike errors with tons of symptoms that are just misleading enough that the decoder miscategorizes it.

Well I also had a similar issue.

As far as I know, when you are considering Lattice Surgery specifically Merging Operation, you get the final output state depending on Measurement result. For applying CNOT operation between two Logical qubits, according to what result(Merging Operation) you get, you decide whether you should apply Logical operator or not. In here, All you need to concern if the measurement error is either odd or even. so basically if you are thinking about temporal Logical failure, that is why you should think measurement error parity.

I hope this information gives some intuition about temporal Logical error.

Not the answer you're looking for? Browse other questions tagged surface-code or ask your own question.