What does a gate electrode do in the context of a quantum dot?

I am trying to understand the creation of qubits through the use of quantum dots, but I have always had some trouble understanding the function of the gate electrode. I know it can control the chemical potential of the dot itself, but how does it actually work?

tl;dr section II.E of this paper

The way the gate electrode works is that a conducting metal layer is fabricated in proximity to the dot, with some dielectric separating the two so that charge cannot actually flow between them. Applying a voltage to the electrode can load it with many electrons, creating an electric field through the dielectric and onto the dot, which adds a constant energy to the entire level structure of the dot.

One particular use of this is explained in section II.E of the paper I linked, called the Coulomb blockade. The chemical potential says how the energy of the dot changes if an electron is added to the dot. In the image, each level $\mu(N)$ is the ground-state energy of the dot when there are $N$ electrons in the dot (you have discrete levels because the dot is so small that it behaves like a circular well from QM). What we want to make is a single-electron transistor, where when I apply a certain voltage, current can flow from the source to the drain, one electron at a time. For this to happen spontaneously, we would need $\mu_S > \mu_{dot} > \mu_{D}$ so that we promote tunneling through the first and second barriers. By biasing the dot just right, we create a situation where when one electron tunnels, the chemical potential $\mu(N)$ lies between $\mu_S$ and $\mu_D$ as desired, but a second electron cannot tunnel because the next dot level is too high, so tunneling is suppressed. Whenever the first electron tunnels out to the drain, the dot level drops so that another electron can replenish the dot. Sweeping the gate voltage which periodically cause the dot level for a certain number of electrons to be "just right", so that you get periodic spikes in the current, as shown. 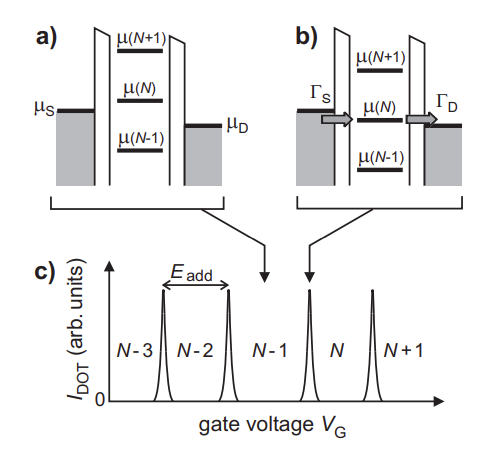 Not the answer you're looking for? Browse other questions tagged physical-qubit quantum-dots or ask your own question.

17
What is the difference between a qubit and classical bit?
16
What does it mean for two qubits to be entangled?
5
How is a single qubit fundamentally different from a classical coin spinning in the air?
8
The process for transferring qubits between locations
9
What does it mean for a quantum computer to have $X$ qubits?
3
What does an observable in a different basis mean physically?
7
How to interpret $-\rvert1\rangle \otimes \rvert1\rangle = -\rvert11\rangle$?
2
Question about DIY Quantum Computer Prototype
0
What are some general concepts of how a classical computer would interface with a quantum computer?
2
What are some resources on qubits based on quantum dots?