What is the quantum circuit equivalent of a (delayed choice) quantum eraser?

Quantum computers are efficiently able to simulate any other quantum system. Hence there must be some sort of equivalent of a (possibly simulated) quantum eraser setup. I would like to see such an equivalent drawn as a quantum circuit, ideally in the variant of a delayed choice quantum eraser.

I seem to be unable to find a convincing equivalence for the interference pattern and for the quantum eraser in simple qubit gates. But I would love to make the thought (and ideally, the real) experiment on a quantum computer, too. What program (quantum circuit) would I need to run on a quantum computer to do that?

I will try to translate the Kim et. al. experiment from an optics description into a quantum information description. Here is the experimental setup as you find it in the linked wikipedia article: 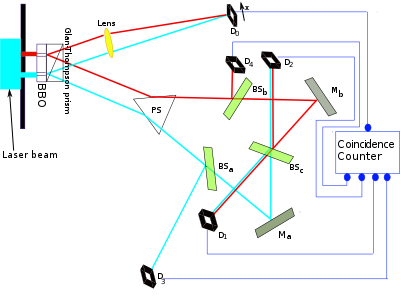 We associate the blue path with $|0\rangle$ and the red with $|1\rangle$. The double slit can be described by a Hadamard gate. The BBO corresponds to a CNOT-gate. The state after the BBO is $\frac{1}{\sqrt{2}}(|00\rangle + |11\rangle)$. There is a phase $\varphi$ depending on the position $x$ of detector $D_0$, which corresponds to a phase gate $R_\varphi=\operatorname{diag}(1,e^{i\varphi})$. Finally superposing the beams on $D_0$ corresponds to another Hadamard gate and the measurement of $D_0$ can be seen to project onto $|0\rangle$. The complete circuit looks like this:

Quirk includes a mockup of the delayed choice eraser as an example circuit:

Any situation where you create an entangled state, and then switch between measuring in the same basis on both sides or a different basis will show the effect. You can reduce it down to fewer qubits if you're willing to give up the more visually direct waves in the output expectation:

In fact you can even make classical analogues:

Check out the link above; it shows a computerized version of the delayed-choice quantum eraser experiment (Schully's) using an IBM quantum computer (with results); the answered provided by previous respondents refer to "Wheeler's delayed-choice experiment" not so much an "eraser" experiment. The difference is addressed in the paper.