Please, pardon the caption. No intention of making new theories. I am a bit confused about the quantum teleportation. I missed a hadamard gate before CNOT gate for creating the EPR pair. But the circuit seems to bee working and copying q0 to q2.

Results consistent with q0 wave function: This is measurement of q2 for multiple shots 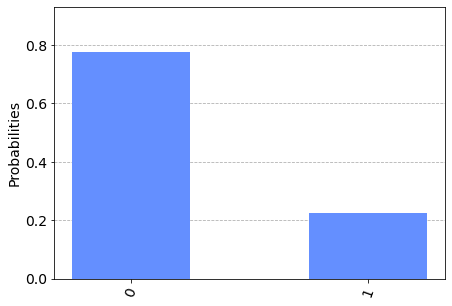 I am new to quantumn mechanics domain, any guide or help would mean a lot. Thank you for your help :).

Your circuit gets lucky on the probabilities for this one particular value, but doesn't work for any other. It also produces the wrong state, as you can confirm in this adjusted version of the quirk teleportation circuit. Compared to the original initialized with your value your phase is off.

The difference becomes even clearer when you use the rotating message from the original quirk teleportation circuit and remove the the Hadamard as in your circuit. To no great surprise, there is a value at which the probabilities are correct, but as you can see from the receiving qubit sadly moving up and down the Z axis the state is not correctly teleported.

There are infinitely many states that produce the same probability distribution, because:

Also recall that you can multiply with an arbitrary global phase and that shifts along the x or y axis are orthogonal and thus don't influence the outcome when measuring along the z axis. The QFT is a nice example of this property, where, depending on the input, the different qubits have a different phase (essentially rotating on the x,y-circle), but they have equal probability for all inputs.

Not the answer you're looking for? Browse other questions tagged qiskit entanglement measurement teleportation or ask your own question.