Do there exist problems known to be computationally intractable for quantum computer, but tractable for classical computer?

Or alternatively phrased, is it believed that the complexity class P is a complete subset of BQP? Consider the following diagram à la MIT OpenCourseWare, which seems to explicitly state as much. 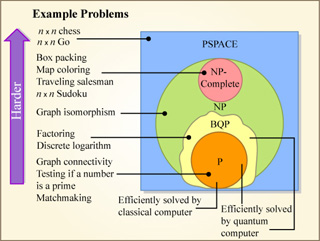 The physics intuition behind $P \subset BQP$ is based on the correspondence principle which says that under suitable conditions quantum mechanics reproduces classical physics. The principle is grounded in the common sense observation that most of the time macroscopic world behaves classically despite being fundamentally quantum mechanical at the microscopic level. Therefore, any classical computer can be viewed as a quantum system and thus simulated by a quantum computer to any accuracy with reasonable overhead.

Any classical computation can be viewed as a function $f: \{0, 1\}^n \to \{0, 1\}^m$. Each component $f_i$ of $f$ for $i=1,2,\dots,m$ is a boolean function for which we can write down the truth table. Given the truth tables we can build a classical circuit consisting of the AND, OR and NOT gates that computes $f$. Now, AND, OR and NOT gates can all be implemented using the NAND gate. Thus, NAND gate is universal for classical computation.

Next, we prove that any classical computation can be done reversibly. This follows from the fact that the NAND gate - which is not reversible - can be implemented reversibly using the Toffoli gate. This is done by setting the control bits of the Toffoli gate to the inputs of the NAND gate and by setting Toffoli's target bit to $1$. Fully rigorous argument also shows that the overhead incurred by uncomputation is polynomial.

You can look at Mike and Ike "Quantum Computation and Quantum Information" section 1.4.1, 'Classical Computations on a quantum computer' for more details.

Not the answer you're looking for? Browse other questions tagged complexity-theory bqp or ask your own question.

17
What is postselection in quantum computing?
29
Are there problems in which quantum computers are known to provide an exponential advantage?
27
Why is a quantum computer in some ways more powerful than a nondeterministic Turing machine?
12
Is there any general statement about what kinds of problems can be approximated more efficiently using a quantum computer?
9
Is BQP only about time? Is this meaningful?
8
What is recursive Fourier sampling and how does it prove separations between BQP and NP in the black-box model?