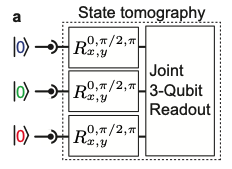 I am wondering about the symbols after the zero kets, before the rotation gates. The caption reads, "Gate sequences producing states with increasing number of entangled qubits: (a) the ground state (no entanglement)".

The picture has two parts: The first goes until the dots. It is simply three $|0\rangle$ states. (The ground state.)

You will recognize that the same picture -- but only until the dot -- is used in panel b) and c) of the same figure.

After the dot, there is a second part of the circuit -- starting with the open half-circles -- which describes the measurement/tomography of those three states. This is the second half of the experiment.

At first, this was just my interpretation of the pictures, but then I re-read the caption carefully, and indeed, later it says: "The state tomography sequence shown in a is also applied in b and c."

Not the answer you're looking for? Browse other questions tagged quantum-operation tomography quantum-circuit or ask your own question.