What are the interesting spikes in this after-QFT graph (page 241) of Programming Quantum Computers?

I'm reading Programming Quantum Computers trying to understand Shor's algorithm. I learned there that we prepare a state $|x^i \bmod N\rangle$, then apply the QFT to this state. The QFT changes the amplitudes from a uniform superposition to large amplitudes evenly spaced out by the period of $x^i \bmod N$. For example, here's a graph of the amplitudes after applying the QFT with $N = 35$. That's on page 241. 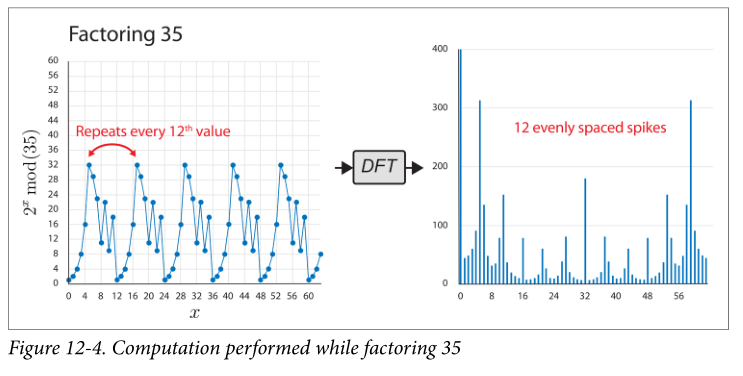 The book says there are 12 spikes evenly spaced. I see a lot more than 12 spikes evenly spaced. Should I count just the highest ones and stop when I've counted 12? But isn't that subjective? How would I figure out that the number is really 12 from just looking at this graph without knowing the right answer? (In other words, how do I get 12 out of this?)

Looking at the graphs you've reproduced, the left graph shows the evaluation of $2^x\bmod 35$ for $x\in\{0,\dots 63\}$ while the right graph illustrates the amplitude of the discrete Fourier transform for $\hat{x}\in\{0,\dots 63\}$. The comment that there are "12 evenly spaced spikes" indicates that the local maxima of the right graph repeat every $64/12=5.33$ values.

From these respective samplings of $\hat{x}_i$, you can run the classical portions (the continued fraction portion) of Shor's algorithm to deduce that, indeed, there were 12 evenly spaced spikes in $\hat{x}$, giving you the period of $12$ in $2^x\bmod 35$. There are a lot of details that I'm forgetting but the point is that you use the samples from your QFT as inputs to this classical portion.

Not the answer you're looking for? Browse other questions tagged shors-algorithm or ask your own question.

2
Is this the correct quantum circuit for the order-finding algorithm?
10
Does the quantum Fourier transform have many applications beyond period finding?
2
Quantum computers don't try all the possible solutions, so how does the QFT really work?
8
What are the thermodynamic limits of Shor's algorithm
4
Shor's algorithm: what to do after reading the QFT's result twice?
2
How to build an example of Shor's algorithm for the discrete log?
3
Where is the extra qubit after QFT$^{-1}$ coming from in Shor’s algorithm?