There are several countries that are actively participating in the "Quantum Race", most of which are making significant investments. The estimated annual spending on non-classified quantum-technology research in 2015 broke down like this:

If you chart that out, it looks something like this: 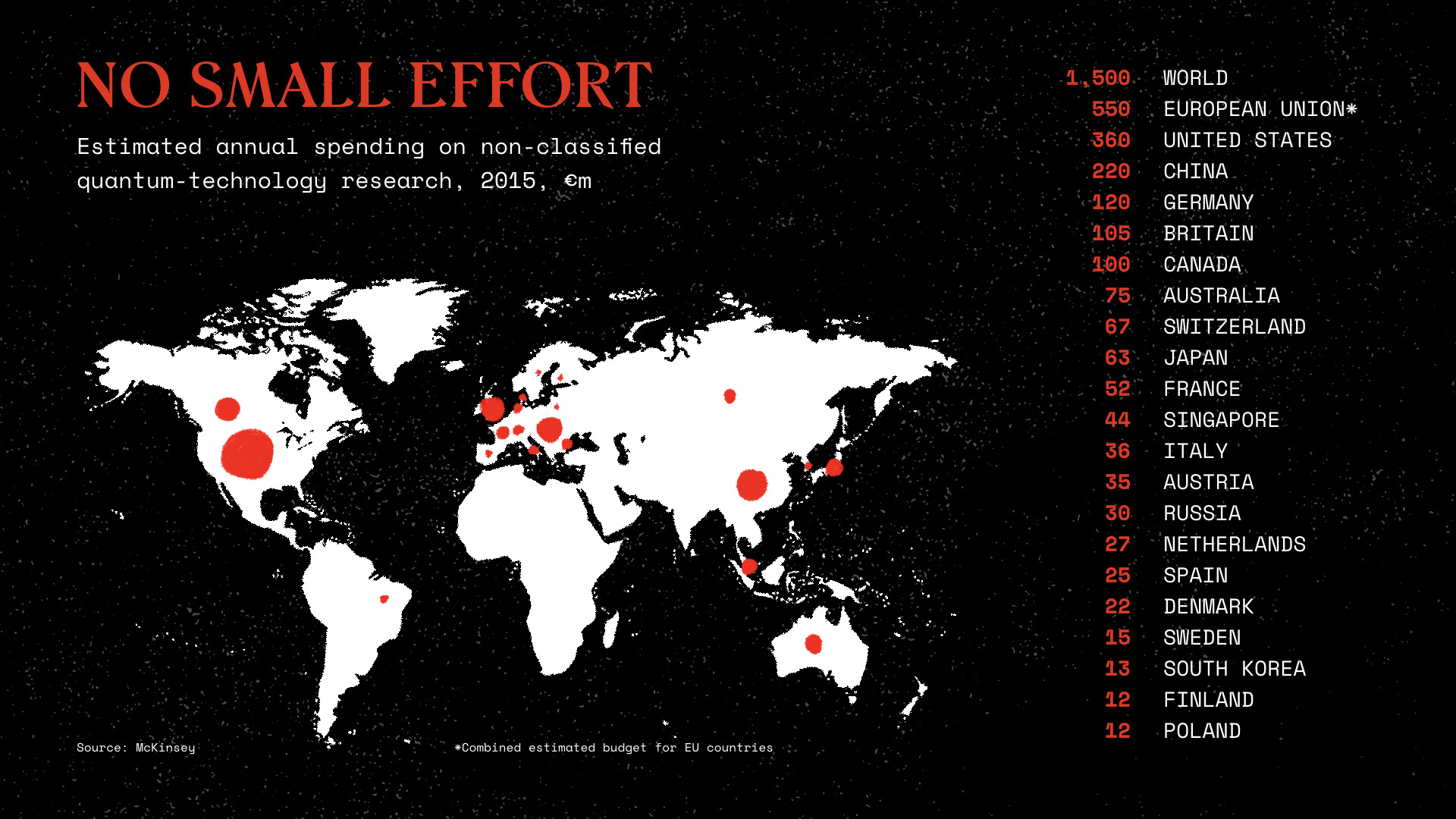 As you can see the European Union invested a combined 550 €m. It's also interesting to see how this investment correlates to patent applications from each of these countries: 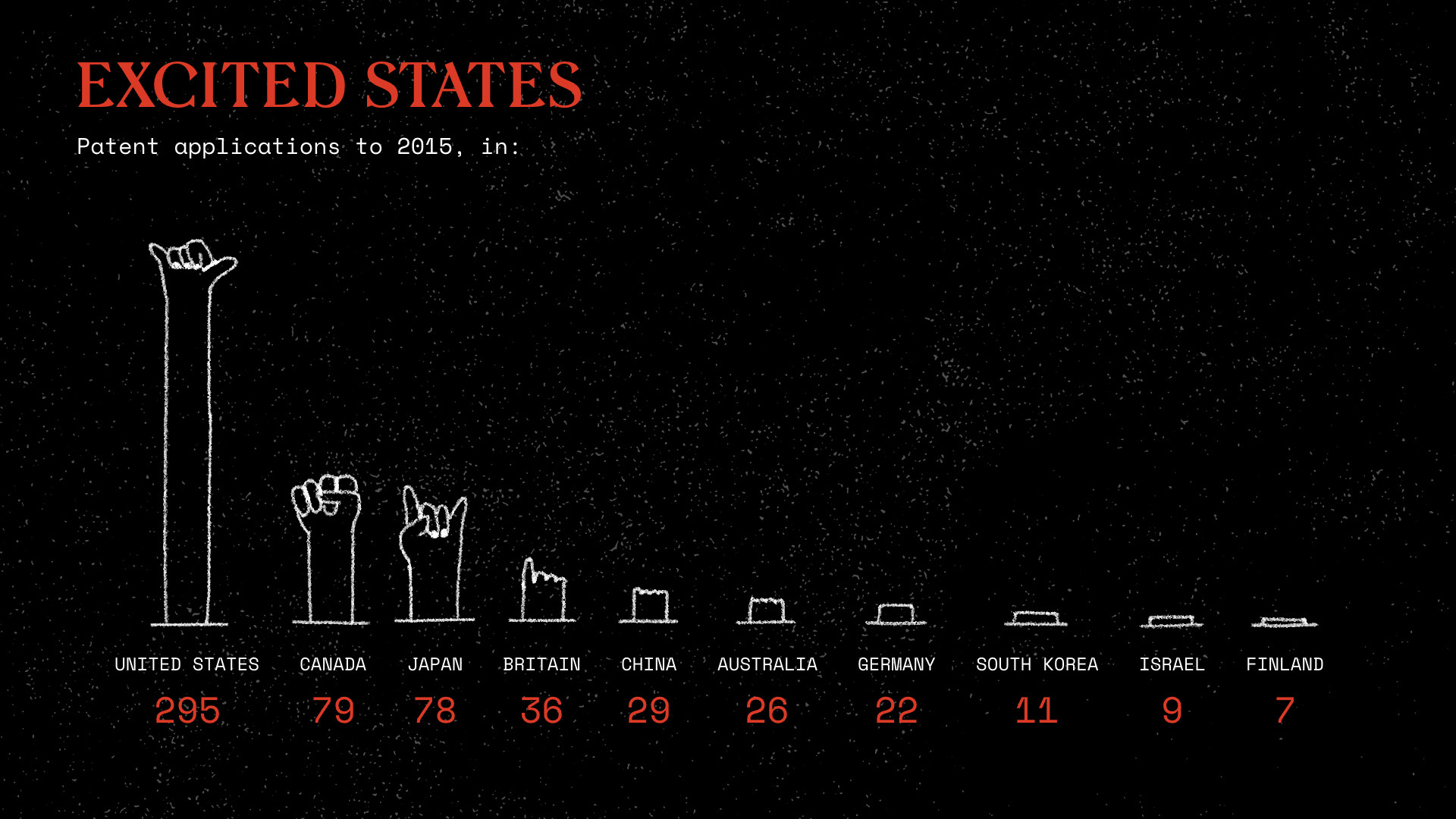 Since 2015 the interest from countries in quantum computing has grown significantly. The worldwide investment has now broken 2,000 €m. The biggest increase has been seen in China's spending which encompasses quantum computing but includes quantum information systems as well.

There are several examples of countries investing in quantum computing in the past year that might be of particular interest. These include:

China - In 2017 China announced that it was set to open a National Laboratory for Quantum Information Sciences by 2020. This included a 92-Acre, $10 Billion quantum research center.

Japan - In 2017 in a joint, state-sponsored research project with Japan’s National Institute of Informatics and the University of Tokyo produced the machine, Nippon Telegraph and Telephone (NTT) shared a prototype quantum computer for public use over the internet.

Sweden - In 2017 Sweden invested 1 billion Swedish Krona (roughly $118 million or 100m €) into a research initiative with the goal of developing a "robust quantum computer".

Note that the United States has been seen as not investing enough into quantum computing and over the summer academia and industry testified before the U.S. House Subcommittees on Research & Technology and Energy in an effort to spur investment into this space. Most notably Dr. Christopher Monroe was quoted as saying that "U.S. leadership in quantum technology will be critical to our national security, and will open new doors for private industry and academia while ensuring America’s role as a global technology leader in the 21st century.”

Actually, after having researched the question over the last months, the two answers (one above and one below) are correct, but we can build upon them to get something more up to date. The first answer, however, relies on figures and data which are slightly obsolete, while the source is uncertain (it is impossible to know if the source is McKinsey or The Netherlands). We have updated these figures for a number of countries and also updated the way to understand the race and its funding as static figures do not at all reflect what is happening in the world. So, for example, in terms of government funding, according to available non classified figures we would have China, leading followed by Germany then by the US.

The picture above is just a screenshot (sorry for the definition). You can watch the dynamic mapping we came up with showing this state of play of the evolving race in the article - we recorded it as a short video to show evolution Mapping The Race for Quantum Computing - Quantum, AI and Geopolitics (3)

Yet, things are actually not that simple. As underlined by JanVdA, indeed, as soon as one adds one of the giant IT companies, it becomes clear that they lead the race. We did the test with IBM and the amount of funding just completely dwarfs state funding in a quite impressive way (this is the fifth mapping in the article mentioned above). We also foresee that all this is likely to be completely upset by the entry of Venture Capital notably through mega tech funds such as Vision Fund (belonging to Softbank, which is also the major shareholders of Ali Baba). The overall amount of the fund is 100 billion USD, for digital and new tech, not only quantum... yet this is an awfully huge amount of money available. Interestingly Saudi Arabia has invested 45 billion USD in this fund. Thus if we just play a rapid "what if" scenario and imagine that one third of Vision Fund is invested in Quantum Computing - i.e. 33 billion USD - this means that Saudi Arabia will have invested $14.85 bn in quantum tech... which puts it at the forefront of the race in terms of funding. True enough, there is a difference between yearly funding and venture capital investment for which we should also account. Nonetheless, when one knows that Softbank plans for a second Vision Fund, then investors within these funds become really serious player in the Race to Quantum Computing.

Finally, it is also truly important to understand that the race has quite numerous specificities that need to be considered if one want to truly assess who is at the top or not. Our work is work in progress considering the amount of research needed. So, stay put. Furthermore, it is not because a lab publishes a lots of scientific papers, or because an actor spends a huge amount of money that the still necessary breakthroughs to create and engineer a universal quantum computer will take place in that country and/or in this lab. Thus, we should consider that the race is still young, and that it is conducive to surprises.

So it are enterprises that are leading this race and not countries.

Not the answer you're looking for? Browse other questions tagged physical-realization quantum-advantage or ask your own question.