Definitions of $D_y$ gate in Hamiltonian simulation: are they the same? 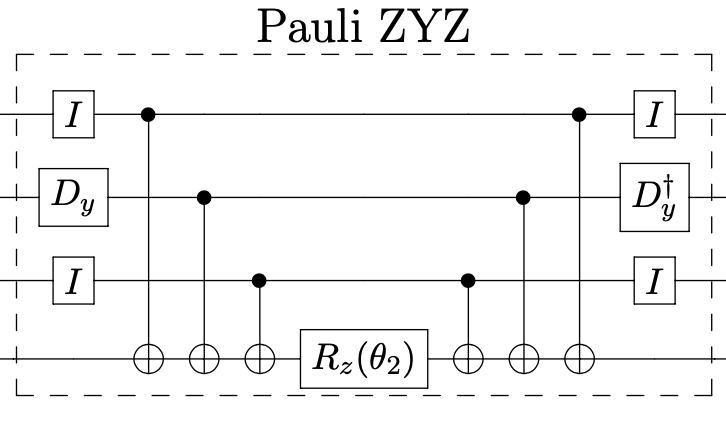 However, unlike $D_x$, which is the Hadamard gate, I found $D_y$ is sometimes written in different ways, like in this answer by @Craig Gidney:

and in this answer by @Davit Khachatryan:

Thus I'm wondering are those different versions of $D_y$ the same thing? Are they essentially all belong to $U_2$ gate?

Also, when should we use two $U_3$ gates outside of the CNOT gates to perform the time-evolution simulation (like in this case, the answer from @KAJ226)?

A and C are technically the same thing, they only differ by a global phase, which makes no difference.

B is technically different, but serves the same purpose. Note that if $UYU^\dagger=Z$, then $$R_zUYU^\dagger R_z^\dagger=R_zZR_z^\dagger=ZR_zR_z^\dagger=Z$$ so if the only effect you're interested in is the diagonalisation of $Y$, there is a freedom of an arbitrary $Z$ rotation $R_z=e^{i\theta Z/2}$ in the definition of your unitary.

Not the answer you're looking for? Browse other questions tagged quantum-gate hamiltonian-simulation pauli-gates hadamard or ask your own question.

7
How do you represent the output of a quantum gate in terms of its basis vectors?
10
How to construct matrix of regular and “flipped” 2-qubit CNOT?
3
Hamiltonian simulation in quantum computation
1
Approximating unitary matrices — restricted gateset
2
Problem with commutation of $e^{-iH_1t}$ and $e^{-iH_2t}$, where $H_1$ commutes with $H_2$
1
How to build a circuit for simulation of a simple Hamiltonian?
4
How does adding an identity to an Hamiltonian affect the corresponding time-evolution in the Bloch sphere?
3
Gate cancellations in Hamiltonian simulation
2
How to find the normalization factor of the eigenvectors of the $\sigma_x$ Pauli gate?