Can one use a quantum circuit as a pathfinding algorithm?

I've been learning about quantum computing, and I noticed that another way to describe the state vector is as a path in a binary tree where each level of tree represents another qubit, each node represents a state, and the edge weights represent the probability amplitude of moving from one state to another. Here's an example: (Sorry for MS Paint!) 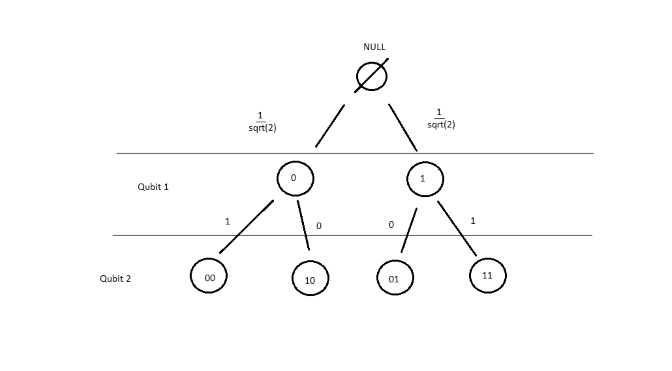 Now what's interesting is that if you start with a state vector of |0>, placing qubits into superposition opens paths in the tree, while entanglement and "measurement" close paths. I was working this out with the sudoku example in the qiskit textbook at Qiskit Grover's Algorithm Example, and I found that if you adhere to the following principles, you can find the solution state while avoiding false paths in the tree just by following the quantum circuit:

So, the circuit design would look like this (forget about the diffuser and toffoli for the moment):

I did a step-by-step implementation of this in excel, drawing out all of the trees, and I found that only two main sub-trees form (one for each solution) and that at most only four sub-trees/branches are present at any one time. Furthermore, at the end, all of the clause bits were in the state 1. Now considering that there are a total of 8 qubits in this system, a total of 256 different paths are possible. Is this just a trivial example or could this actually be implemented as a viable algorithm for path finding?

Edit: P.S. Could this answer P = NP? Also I noticed my quantum circuit isn't quite correct.

Browse other questions tagged algorithm qiskit circuit-construction grovers-algorithm or ask your own question.

4
Example of a quantum algorithm better than its classical counterpart which involves only $1$ qubit?

9
Grover's algorithm in a nutshell
1
Quantum search algorithm with exactly 2 solutions
3
Quantum circuit for Szegedy quantum walk on a cyclic graph
3
Is there a "parameterized initialization" that I can apply to a QuantumRegister to re-use a circuit?
2
Can we measure the quantum circuit sequently when using Qiskit?
3
How can one evaluation of $U_f$ in Grover's algorithm use only one query of $f$?
3
Understanding Grover’s Oracle for 3-SAT
2
Using Quantum Bit String Comparision inside Grover's algorithm