Is this a Bell test?

As such, you could prepare a Bell pair, (maybe) measure half of it and then check if the other half was affected as follows: 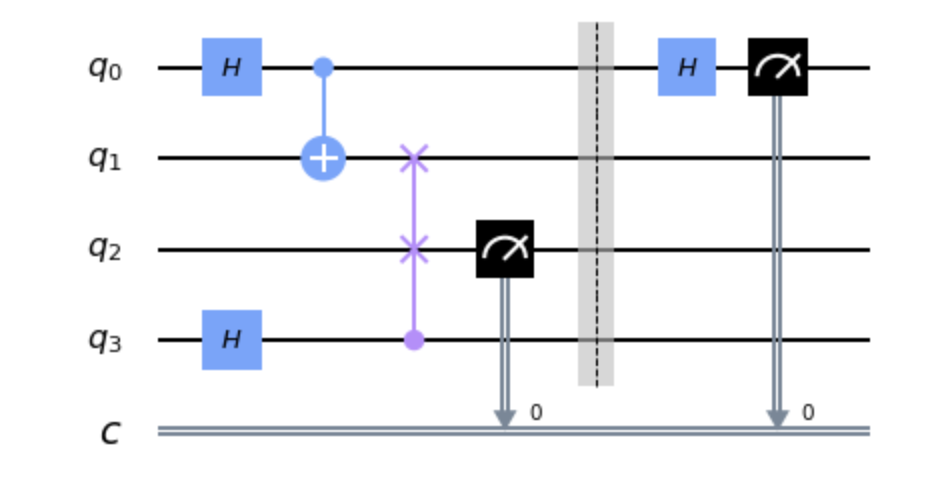 If measurement changes the top qubit then the second $H$ gate should put it back into the |+> state and we should measure random results. If the measurement doesn't change the top qubit, then it should turn the $|+\rangle$ back to $|0\rangle$, deterministically measuring 0. Right?

If so, then I'm hoping there's some extension of the uncertainty principle that would imply that because there is no knowledge about whether the second qubit was measured, we could learn something about the first qubit. I hope.

Of course I've tried to test this but I don't believe the qiskit simulator and none of the IBM devices allow operations to take place after measurement ("Qubit measurement not the final instruction. [7006]"). So can anyone think of a way I could test it? Does this count as a Bell Test? Has this been tried before? Am I missing something obvious?

Not sure if this is the right place to post this but just interested to hear people's thoughts/predictions.

No, this isn't a Bell test. Testing for a violation of Bell's inequality requires testing over several distinct measurement bases. For a good example of Bell tests run on IBM hardware, see section II(3) here.

To run the circuit in the OP, just move the second $H$-gate on $q_0$ in front of the measurement on $q_2$. This will have no impact on your outcomes distribution (i.e. these two operations commute).

Edit: After skimming through the linked article, I would recommend caution when considering this commentary. The author, although impressive for a college junior, has some severe misconceptions regarding several important concepts.

Not the answer you're looking for? Browse other questions tagged qiskit entanglement bell-experiment or ask your own question.

5
Definition of locality in Bell experiments
3
Simultaneous eigenstate of commuting observables and their tensor product
1
Is back in time (classical) information transfer possible (based on delayed choice entanglement swapping)?
3
How to measure in the bell basis?
3
How does the teleportation circuit work after the initial entanglement?
2
Output of Bell State Measurement
8
If quantum computing always return random measurement (or uncertain measurement), why do we still need it?
3
Qiskit - Circuit drawing esthatics - can i force the measurements in my circuit show at the end?