What's the relation between the sign of error correction code and commute of operators?

For example, the 5-qubit QECC. 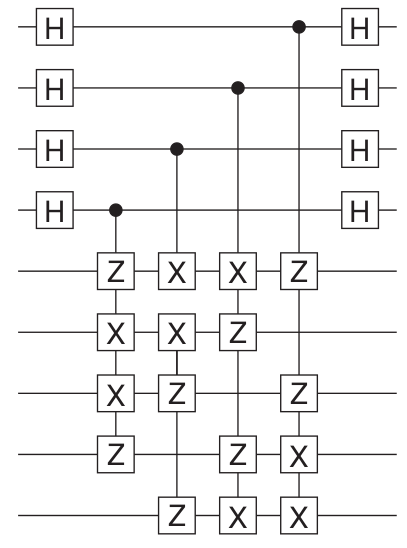 What you are describing is called indirect measurement, and it forms the backbone of the stabilizer formalism. To understand it, we can just work with a general element of the Pauli group, which in the below diagram is the gate labeled $P$. Also, the $|\phi\rangle$ wire is generally a bundle of $n$ wires, and the gate $P$ acts on all of them (in your example, it is a five-qubit state, and each single-qubit Pauli is $X$, $Z$, or $I$), but for this example let's just assume it's a single qubit.

Working out the action of the circuit, we get

This means that the outcome we obtain when measuring the ancilla determines which operator we apply to the data qubit(s). Working out just the first term, as if we measured the ancilla and collapsed it to $|0\rangle$:

So the action of the operator is to project onto its positive eigenspace, conditioned on the ancilla outcome (and you can check that the other outcome projects onto the negative eigenspace). Since we only project onto a subspace, instead of collapsing to an individual state, this is called indirect measurement. To be clear, in this example $|\phi_+\rangle$ is just a ray in Hilbert space, but you can imagine other projectors like $ZZ$ which define even/odd subspaces, not rays.

If we intentionally prepare $|\phi\rangle = |\phi_+\rangle$, then the ancilla can only ever give 0, because no part of the data state lies in the negative eigen(sub)space ($\alpha=1, \beta=0$).

Now, what happens if some error $U$ occurs, somewhere before the gate $P$? Since the error is also assumed to be some Pauli, it also has some positive and negative eigenspaces. Furthermore, note that any two elements of the Pauli group must either commute or anticommute.

In this way, errors ($U$) that commute with the stabilizers ($P$) are undetectable, because they do not flip the sign of the corresponding ancillas. But any errors that anticommute with at least one stabilizer will flip at least one ancilla, and we can detect the error. Then, the only thing left is to make sure that different errors trigger unique sets of ancillas, which are called syndromes, so that the errors are uniquely decodable.