What does the adjoint of a channel represent physically?

Is there any general physical interpretation for the adjoint channel?

The adjoint of a channel $\Phi$ represents how observables transform (in the Heisenburg picture), under the physical process for which $\Phi$ is the description of how states transform (in the Schrödinger picture). So, in particular, the expected value of a measurement of the observable $E$ on a state $\Phi(\rho)$ is equivalent to the expected value of the observable $\Phi^\dagger(E)$ on the state $\rho$.

Notice that the adjoint channel is CP (since it admits a Kraus decomposition) and unital (from the trace-preserving property of the original channel). Now, here's a way to interpret the adjoint channel: Let $\{ \Lambda^{j} \}$ be a POVM, then the probability of getting outcome $j$ from a measurement on state $\rho$ is $$ p_{J}(j)=\operatorname{Tr}\left\{\Lambda^{j} \mathcal{N}\left(\rho\right)\right\}=\operatorname{Tr}\left\{\mathcal{N}^{\dagger}\left(\Lambda^{j}\right) \rho\right\} $$

The latter expression can be interpreted as the Heisenberg picture, where we evolve the ``observables'' instead of the state $\rho$ under the action of the channel $\mathcal{N}$.

You can find more details in these lecture notes by Mark Wilde.

This may be broader than what you're looking for, but it's clear from your question that you've read up on the QIT materials on the subject already. So I'll try to give a different perspective (more GR-ish) that I think is much more intuitive. The concepts are very portable, so hopefully it's helpful.

I usually think of adjoint operations in terms of pullbacks and their adjoint pushforwards. For a simple example, assume we have smooth maps $f: \mathcal{Y} \rightarrow \mathbb{R}$ and $g: \mathcal{X} \rightarrow \mathcal{Y}$, as shown below. In this case, the pullback of $f$ to $\mathcal{X}$ is simply the composition $\Phi = f \circ g$. 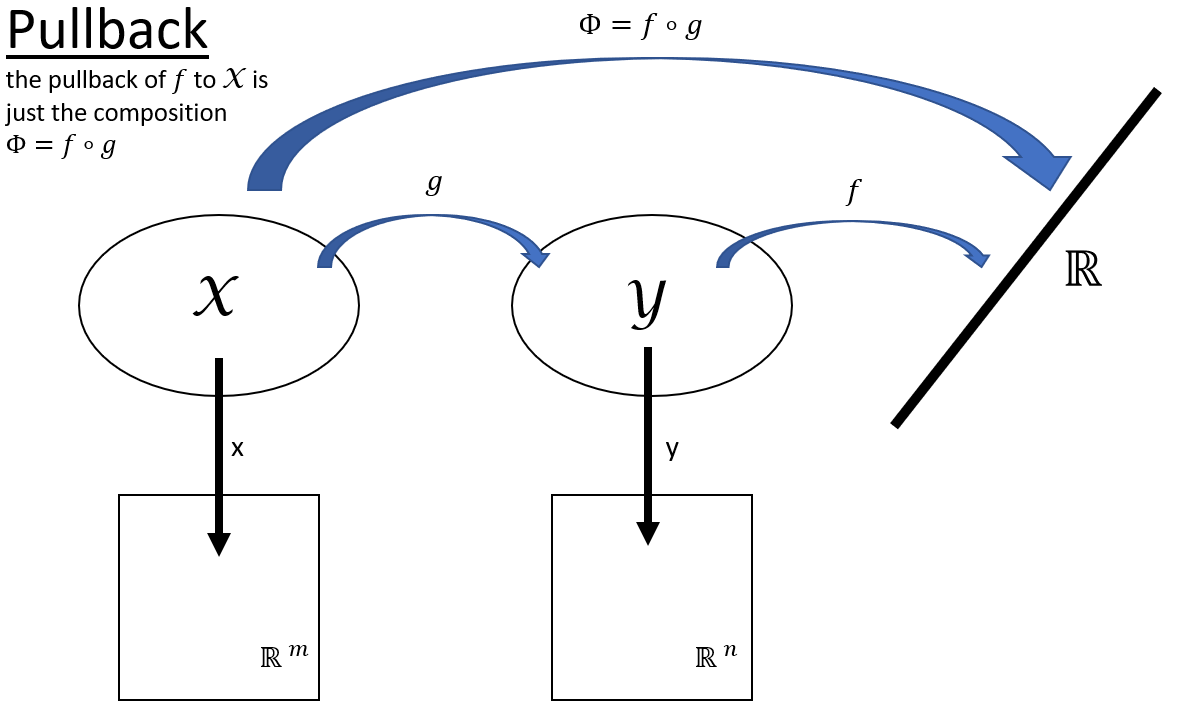 However we can define the pushforward of a vector from $\mathcal{X}$ to $\mathcal{Y}$, which is the adjoint to the pullback described above. This is possible because we can treat vectors as derivative operators that map functions to $\mathbb{R}$. 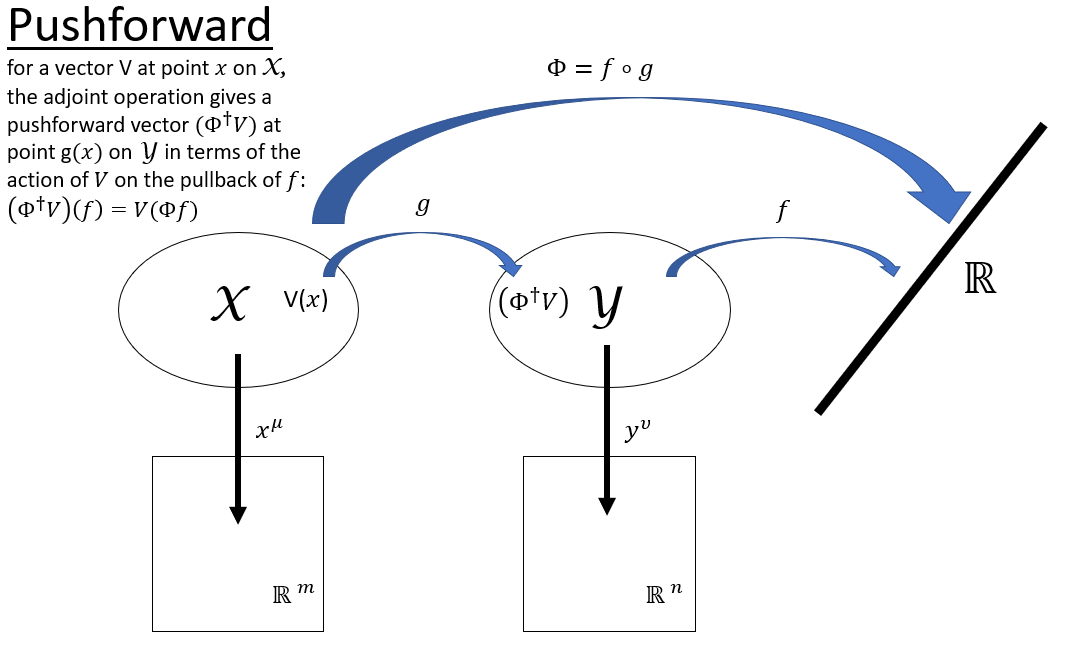 This was a bit long winded, but still doesn't do the subject justice. If you think this approach to building intuition might be helpful, Sean Carroll has a phenomenal exposition on the subject in Appendix A, Maps between Manifolds, in Spacetime And Geometry.

Not the answer you're looking for? Browse other questions tagged quantum-operation or ask your own question.

3
Analyzing the composition of a channel with its adjoint in relation with an identical composition obtained for the channel's complement
1
How do successive operators act in the Heisenberg picture?

4
Do the Kraus operators of a CPTP channel need to be orthogonal?
6
Do the eigenvalues of the Choi matrix have any direct physical interpretation?
3
What does a "Choi state" where we relax the partial trace condition represent?
3
Can any channel be written as $\Phi(X)=\operatorname{Tr}_{\mathcal Z}[U(X\otimes \sigma)U^\dagger]$ for any state $\sigma$?
4
Prove that $A\preceq B$ implies $A=\Psi(B)$ for some channel $\Psi$
3
Equivalence of two ways to recover a map from its Choi state
2
Why is $\Phi\otimes \operatorname{Id}_n$ being positive on maximally entangled states sufficient to know that $\Phi$ is CP?
4
What are the possible channels preserving purity of all input states?