Why attenuator and not filters for QC driving line

In all the cold quantum computer designs (superconducting qubits, spin qubits) attenuators are put on the driving lines. Their role is to kill the noise spectral density that comes from higher temperature stages, such as the Johnson-Nyquist noise. Indeed the pulses are generated at high temperature and may contain a lot of noise that is required to be killed.

My question is simple: Why do people put attenuators which dissipate a lot of heat, and not simply filters? Indeed the goal is to kill the noise at qubit frequencies. Filter that do not let pass this frequency would be enough and can not be dissipative.

(1) Both filters and attenuators are used

Let me just start by saying that non-attenuating filters have not been completely ruled out by people working in the design of cold quantum computers. I will use quotes from three papers, all from 2018, to support this point.

"These residual cavity photons arise from a variety of sources, e.g. thermal microwave photons from blackbody radiation that is improperly attenuated or filtered in the cryogenic environment [12]."

Note that the authors mention that the photons have to be attenuated or filtered.

"Further improvement may be possible with more careful choice of attenuator/filter configuration or active cooling techniques."

Notice that the authors mention both attenuators and filters together here.

"RF lines on the other hand are realized as semi-rigid microwave cables and contain various microwave components such as attenuators, filters or amplifiers."

Again the authors do not rule out the use of filters!

"This coupling opens a channel for auxiliary components in the microwave wiring to affect the temperature of the cavity mode. Examples of such components are commercial cryogenic attenuators, filters, isolators, etc."

Again the authors do not rule out the use of filters, and later they even say that their cavity attenuator acts as a type of Purcell filter:

"the cavity attenuator filters out off-resonance radiation and thus further suppresses the radiative decay of the qubit [11, 12], acting as an effective Purcell filter [39]."

(2) Attenuators have been compared directly to filters and attenuators were better!

In "Paper #2" mentioned above, they did an experiment in which a non-attenuating filter was compared to various attenuators:

"As a control experiment, we also measured an aluminum filter with identical dimensions to the copper attenuator that however provides no attenuation on resonance." 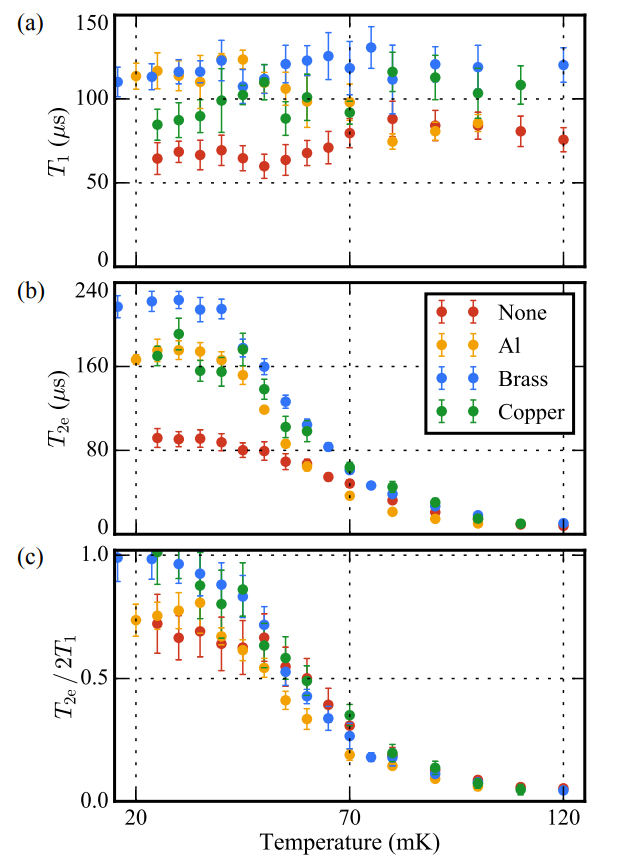 This is for many reasons.

There may be many approximate theories of quantum dissipation, in which the frequencies of the spectral density that are closest to the qubit frequency are the only ones that have a profound effect, but in the formally exact Feynman-Vernon formalism, all frequencies can have an impact on the qubit's decoherence.

If $J(\omega)$ is the spectral density, then the bath response function involving the Bose-Einstein distribution function will be:

Notice that we have integrated over all frequencies. This then enters the Feynman-Vernon influence functional:

This single functional, $I$, is 100% of what you need in order to calculate the dynamics of an open quantum system when given the system Hamiltonian, temperature, initial system density matrix, and assuming that $\rho(t=0)$ of the system plus bath is given by:

This means that the influence functional that tells you how the environment of a qubit affects it, involves a kernel $\alpha(t-t^\prime)$ which does not only depend on the qubit frequency, but involves an integral over all $\omega$.

Another reason is that when you build a quantum computer with 100s of qubits, there's more system frequencies involved than just the single frequency between the two energy levels of a qubit. There's frequencies associated with 2-qubit gates and such, so again the qubit frequency is not the only important frequency.

(4) Dissipation is not always bad.

Most of the papers I've seen talking about attenuation in superconducting qubits are by William Oliver's group at the MIT Lincoln Laboratory, which happens to be a group that is trying to make adiabatic quantum annealers that are like D-Wave's but with also $XX$ coupling (so that they have a better chance at doing universal quantum computation somewhat efficiently). The superconducting qubits at the MIT Lincoln Lab, plus the ones at D-Wave (both of them are aiming to do quantum annealing and not circuit-based quantum computation, constitute a large fraction of all superconducting qubits in the world, and remember that noise can actually help in the annealing process. If you're interested in how dissipation can help with quantum annealing, you might find it more intuitive to first look at:

Even for quantum computing that does not use quantum annealing at all, Paper #2 listed above, says:

"in most of the lines attenuation and thus dissipation is anyway desired in order to thermalize the incoming radiation fields, see Section 2.2."

meaning that dissipation is sometimes desired, so you don't want to remove all of it.

The filters help in reducing the out-of-band radiations in the system, but quantum measurements are not only susceptible to thermal radiation or external noises. For fast computation using transmon qubits, a DRAG (Derivative Removal by Adiabatic Gate) in which a fine-tuned out-of-phase pulse is applied, proportional to the derivative of the original pulse which will increase the fidelity to about 99% and hence, we minimize leakage of information. So, we do not want to filter out this pulse.

Similarly, for a larger number of qubits, we'd have to tune in and out of resonance to control the transition frequency which is done by applying current to the flux bias line. In QED you have resonators for carrying out coupling and readout and the flux is generated in the circuit which detunes the qubit from its operating frequency and adds a significant phase to it, and this is handled by applying pulse-shaping techniques like fast adiabatic pulses and controlling the energy state of the qubit. So, you can definitely not use only filters at every stage of the quantum process and hence attenuators are used instead but at further steps, you can add filters for example when you are dealing with distortions of electrical components where you can desert the extra frequencies.

Though this still is quite a challenge as we can still not correct distortion with precision, maybe if the approach is changed we can do that, but the effective one right now as I discussed in the case of superconducting qubits, will require attenuators in the cables for experimenting with charge qubits that are as you specified driver lines that as I have read are used for controlling the quantum states of qubits with a microwave tone realizing single-qubit gates, and for probing the frequency shift of readout resonators, the flux lines, and the output lines.

Not the answer you're looking for? Browse other questions tagged physical-realization noise superconducting-quantum-computing or ask your own question.

24
Why do optical quantum computers not have to be kept near absolute zero while superconducting quantum computers do?
6
Transmons and cooper pair box qubits: two islands or a single island and a reservoir
4
How is a physical qubit measured and how is the result interpreted?
2
Why and how is quantum noise predictable?
5
How are the IBM's and Google's Hadamard gates fabricated and operated?
5
In a transmon qubit, what corresponds to the ground and excited states?
4
Why does making a quantum circuit more noise resilient make it easier to simulate classically?