In some quantum algorithms (for example HHL or quantum machine learning algorithms) an ancilla qubit(s) is measured firstly and based on result of the measurement other qubit(s) are measured or not. For example, in this case, qubit $|c\rangle$ is measured if the ancilla is in state $|0\rangle$: 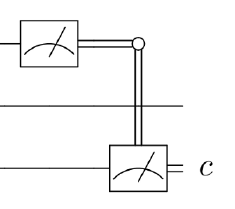 So far, I did post-selection manually. This means that I took all results with ancilla being in a particular state ($|0\rangle$ in the example above), removed others and finally normalized remained distribution to have sum of probabilities equal to 1.

My question is whether is it possible to do so in more elegant way in QASM on IBM Q Experience. This means to define which qubit is the ancilla, set which values of the ancilla has to be measured in order to measure other qubit(s) and get a conditional distribution of measured qubits under condition that ancilla is in some predfined state.

Browse other questions tagged ibm-q-experience qasm or ask your own question.

9
Quantum algorithm for linear systems of equations (HHL09): Step 2 - Preparation of the initial states $|\Psi_0\rangle$ and $|b\rangle$
2
How to make "random U3" in QASM?
5
How to see the QASM code corresponding to compiled Q# function?
7
How to run a qasm file on IBMQ device?
3
What is the source of this TranspilerError when running qasm file?
1
How to get QASM code from IBMQ experience
2
Why running time of qasm simulator is significantly smaller in comparison with quantum machines?
2
Is it possible to modify pulse schedules in QASM?