CNOT in reversible computing and entanglement

The trick is to CNOT the answer qubit (which I'll call the 2nd qubit) $f(x)$ with a fresh ancilla (the 1st qubit) initialized to $|0\rangle$, which changes the state of the first qubit to $f(x)$. Then we use the inverse of the circuit and get back $|x\rangle$ and other ancilla qubits back to $|0\rangle$.

Now this is the part I don't understand. In the quantum case, $|f(x)\rangle$ can be a general quantum state $a|0\rangle + b|1\rangle$, and CNOT has the effect of entangling the first qubit with the second one, such that the joint state of the two qubits is now $a |00\rangle + b|11\rangle$. Now, $U^{-1}$ undoes everything done inside $U$, but it does not undo the CNOT between the first two bits. Therefore, after everything, the first two qubits should still be entangled, right? In that case, why can we write each term in the output as $|x\rangle \otimes |f(x)\rangle$, which indicates that they are not entangled. 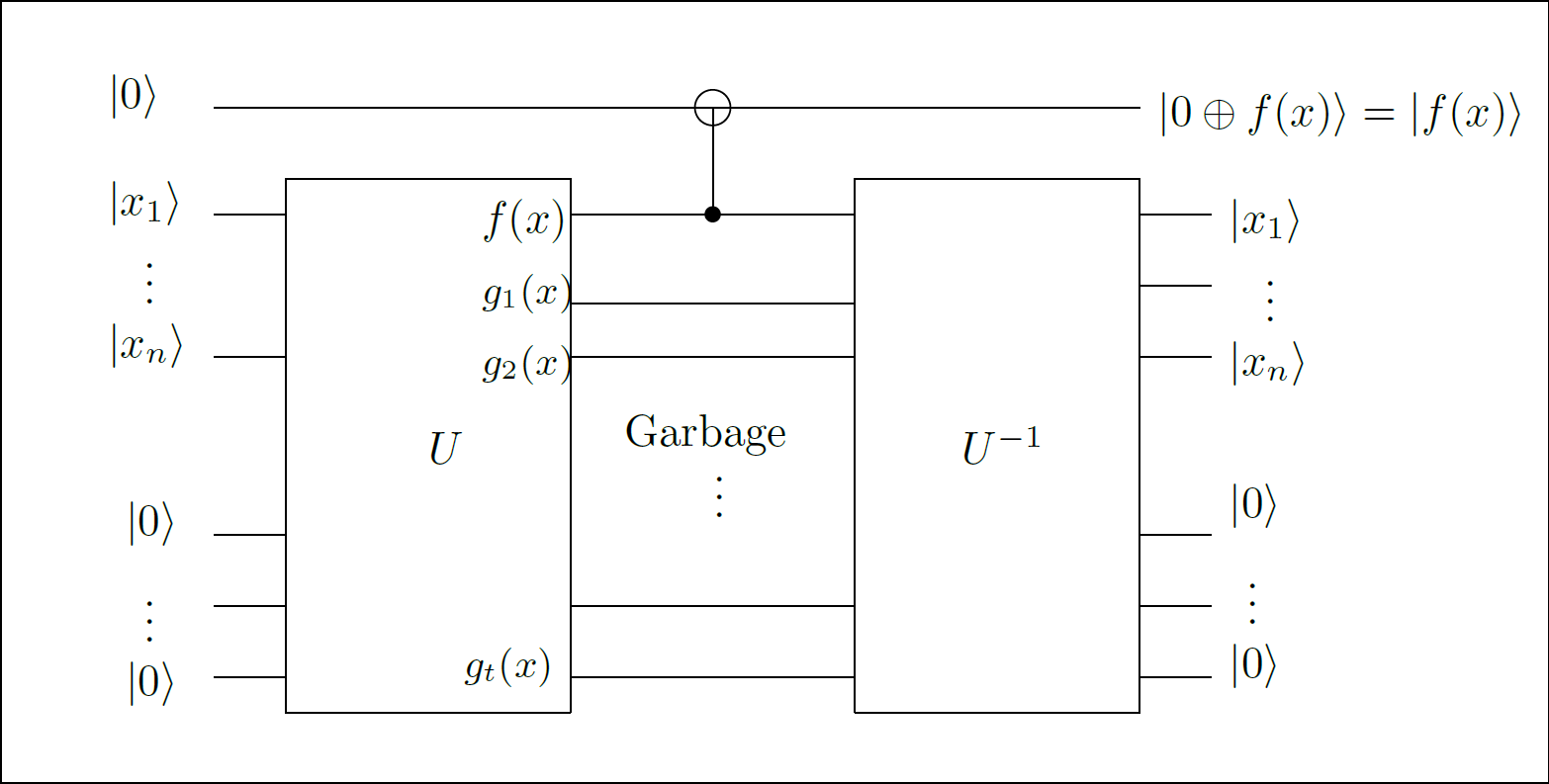 When we talk about reversible computing, $f(x)$ is the scalar value of the function of the input vector $x$, and $|f(x)\rangle$ is a single basis vector, not a superposition of basis vectors. So it all works out and leaves the first qubit entangled with just the inputs, not the garbage qubits.

An illuminating example is reported in the last page of the following lecture notes:

This statement is not quite right: CNOT has the effect of entangling the first qubit with the second one, such that the joint state of the two qubits is now a|00⟩+b|11⟩. In your circuit CNOT only applies operation but does not entangle state, because there are no Hadamard gates.

I.e. This state is not entangled:

and this one is:

Not the answer you're looking for? Browse other questions tagged circuit-construction superposition or ask your own question.

27
Why is it important to eliminate the garbage qubits?
3
N&C quantum circuit for Grover's algorithm
7
Simulating a 3-local Hamiltonian Term
6
Uncomputation in quantum implementation of a classical algorithm
7
Constructing a circuit for $C^1(U)$ for rotation operators with TWO single qubit gates and CNOT gate
3
From mathematical notation to quantum circuit, in general
4
What is wrong with my circuit for the fourth-root of $X$?
1
Is it possible to implement an in-place multiplication quantum circuit?