The title says most of it: What are the implications of Bremermann's limit for quantum computing? The Wikipedia page says that the limit applies to any self-contained system, but in the last few lines they also claim that "access to quantum memory enables computational algorithms that require arbitrarily small amount of energy/time per one elementary computation step".

These statements seem contradictory (unless requiring arbitrarily small amount of energy/time also requires the amount of mass going to infinity). So how does the Bremermann's limit actually affect quantum computing?

From the Wikipedia page you referenced:

"A computer with the mass of the entire Earth operating at the Bremermann's limit could perform approximately $10^{75}$ mathematical computations per second.".

The Wikipedia page says that the limit applies to any self-contained system, but in the last few lines they also claim ... statements seem contradictory.

The whole paragraph is:

The limit has been further analysed in later literature as the maximum rate at which a system with energy spread $ \Delta E $ can evolve into an orthogonal and hence distinguishable state to another, $ \Delta t = \pi \hbar / 2 \Delta E$. In particular, Margolus and Levitin has shown that a quantum system with average energy $E$ takes at least time $ \Delta t = \pi \hbar / 2 E $ to evolve into an orthogonal state. However, it has been shown that access to quantum memory enables computational algorithms that require arbitrarily small amount of energy/time per one elementary computation step.

The paper referenced, "Computing with a single qubit faster than the computation quantum speed limit", seems to explain it fairly clearly:

Page 1: "Introduction. The quantum phase space of a qubit is a sphere (Fig. 1). One can discretize this space into any number of states and then apply field pulses to switch between the chosen states in an arbitrary order. In this sense, a qubit comprises the whole universe of choices for computation. For example, a qubit can work as finite automata when different unitary gates act on this qubit depending on arriving digital words. However, different states of a qubit are generally not distinguishable by measurements. So, if the final quantum state encodes the result of computation, we cannot generally extract this information because we cannot distinguish this state by a measurement from other non-orthogonal possibilities reliably. For such reasons, qubits are believed to provide computational advantage over classical memory only when they are used to create purely quantum correlations, i.e., entanglement or quantum discord."

"Quantum mechanically, distinguishable states must be represented by orthogonal vectors that produce definitely different measurement outcomes. However, the switching time between two orthogonal quantum states is restricted from below by a fundamental computation speed limit T = h/(4∆E), where ∆E is characteristic energy of the control field coupling to the memory that is needed to update one bit of information. So, restrictions on strength of control fields automatically restrict the speed of classical computation that saves information in physically distinguishable states. While the existence of this computation quantum speed limit is a mathematically proved fact, I will show an explicit elementary example that demonstrates possibility of solving a computational problem faster than the lowest time bound that is imposed by this limit on classical computation hardware. Access to the quantum memory makes this possible because it allows information processing using nonorthogonal quantum states. So, there is no more direct linear relation between the minimal time and the number of elementary logic operations required to implement an algorithm at given energy constraints. 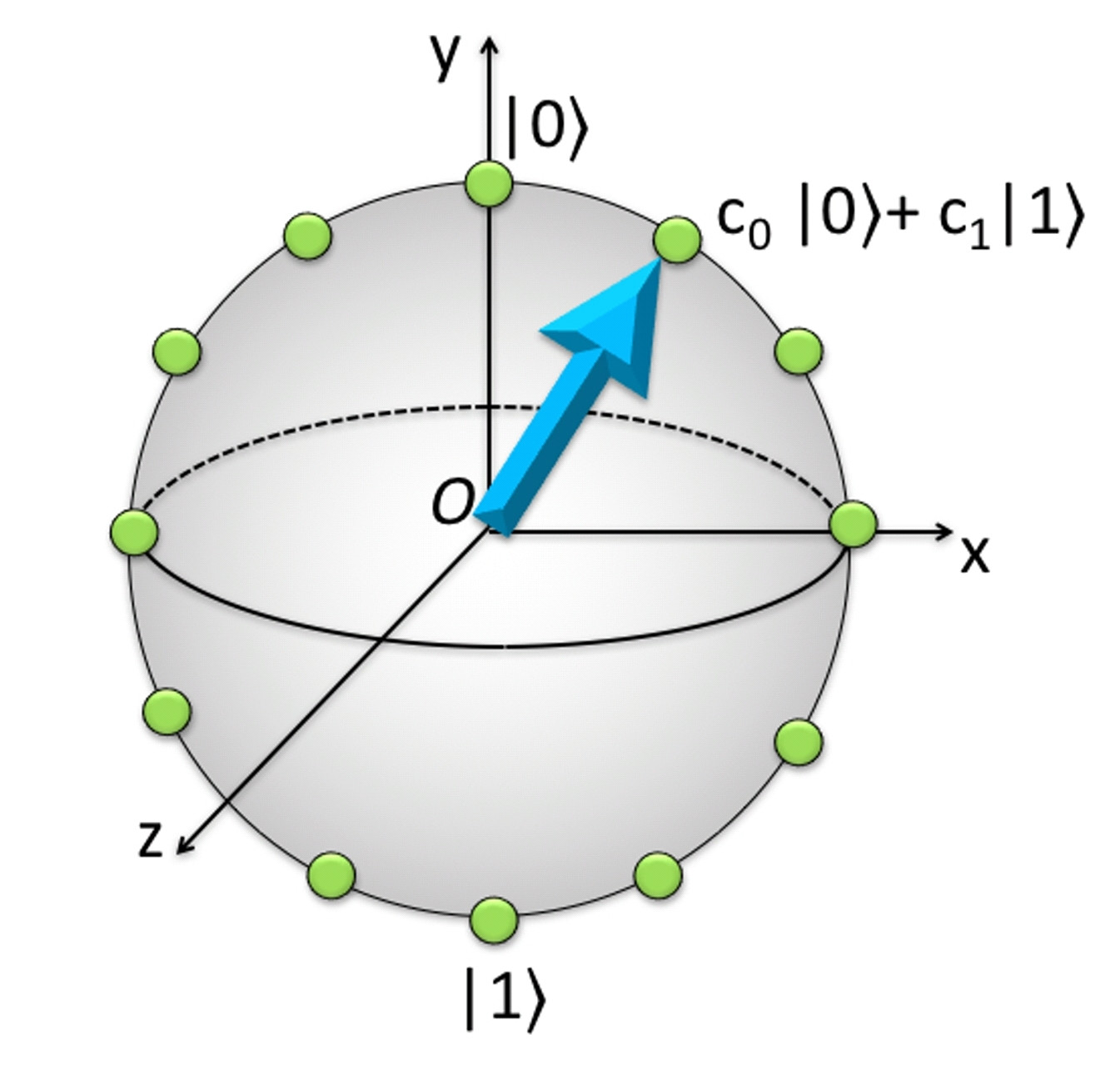 FIG. 1. Up to overall phases that do not influence measurement outcomes, states of a qubit correspond to points on the 2D sphere. This phase space can be discretized to create a register of states (green circles) for computation. However, only opposite points on this sphere, such as the poles marked by |0and |1, are distinguishable by measurements.

[Note: You might barely get by just skimming just the bold text, I suggest you read the whole paper for a better understanding.]

Hopefully that is clear, if you have a comment I can make an edit.

Not the answer you're looking for? Browse other questions tagged speedup or ask your own question.