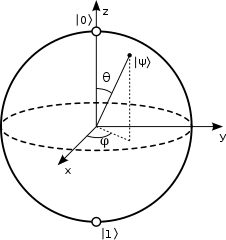 appears with equal probability. The states don't lie on the surface of the Bloch sphere but at a radius of $1/{2\pi}$, such that the sum, which, in the continous case turns out to be an integral, properly works out. So the $\rho_k$ are not pure states!

If I now measure the system in the computational basis, I'll get $\ket0$ in 100% of the cases. So I would assume the state is a pure one, but is it?

We might need infinitely many states $\rho_k$, but maybe a big number is enough to get a good aprroximation. Or did I miss something else?

You're forgetting the requirement that the probability weights must sum to 1.

You can't sum up all the mixed state 3-vectors corresponding to the $\rho_k$ with unit weight to get the 3-vector corresponding to $\rho = \iint_k \rho_k$ - that sum isn't properly normalized. You need to take a convex combination of the $\rho_k$, i.e. a weighted sum $\sum_k \rho_k$ in which the $p_k$ are nonnegative and sum to 1, which yours don't.

In particular, a nontrivial convex combination of several qubit states (by which I mean that multiple coefficients are positive) always has a purity that is strictly lower than the highest purity of the constituent qubit states.

A pure state is any state that can be written in the form $|\alpha \rangle \langle \alpha|$, but you are free to write it any way you like, including as a sum.

A density $\rho$ is any Hermitian trace-1 positive semi-definite matrix. It can be written as $$\rho = \sum_i p_i |\psi_i\rangle \langle \psi_i|$$ with $\{p_i\}$ a probability distribution (i.e. all between 0 and 1 and they sum to 1) and each $|\psi_i \rangle$ a pure state. But, yes, you could write one density as a sum of other mixed densities, provided again your $p_i$ form a probability distribution.

Not the answer you're looking for? Browse other questions tagged quantum-state density-matrix or ask your own question.

3
Purity of mixed states as a function of radial distance from origin of Bloch ball
3
Why is the boundary of the set of states in the generalised Bloch representation comprised of singular matrices?
8
Do pure qudit states lie on a hypersphere in the Bloch representation?
5
Represent a pure state in terms of 2 antipodal points on the Bloch sphere
1
Why don't I get what I expect when measuring with respect to a different basis?
3
Do any two distinct pure states form a basis?
3
What is the complexity of splitting a state into a superposition of $n$ computational basis states?
4
How to write the eigenvectors of a mixture of two pure states?