I'm trying to understand how to read results from an NMR quantum computer.

According to Nielsen and Chuang:

This signal is measured for some period of time, and then the results are Fourier-transformed into a plot like this one 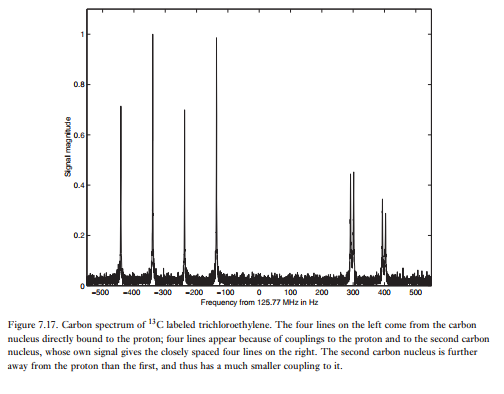 My question is: what do these peaks mean? Suppose I want to know how much of my ensemble is in the $|110\rangle$ (or whatever) state, how do I read this off of the plot?

With magnetic resonance based quantum computing, the amplitude(integrated area) and relative phase of the read-out spectra tells you the state of the qubits.

In this particular example, two different carbon qubits are read out simultaneously, while the third qubit, a hydrogen, would need a separate experiment to read out. The spectrum consists of two distinct doublet of doublets each one representing a qubit. The positive phase would represent being in the 1 state, and integrating the doublet of doublets would yield the probability of being in that state. A negative spectra would represent being in the 0 state.

Though you do need to be careful since the phase in these experiments is arbitrary, so your 1 could very well be a 0, but the relative phase between qubits is not arbitrary. So usually you would also gave an internal phase reference.

For further reading some of the work from J. A. Jones is a good place to start:

Not the answer you're looking for? Browse other questions tagged physical-realization nielsen-and-chuang physical-qubit chemistry or ask your own question.

37
How do I add 1+1 using a quantum computer?
6
Are quantum simulators like Microsoft Q# actually using quantum mechanics in their chips?
5
Construction of ${R_n(\theta)}$ using only the Hadamard and ${\pi/8}$ gates
0
Can entangled qubits be disentangled without using code or software?
3
Simulation of a helium molecule using Qskit
2
Fermionic commutation relation using Jordan-Wigner transformation
4
Quantum indistinguishability using density operators